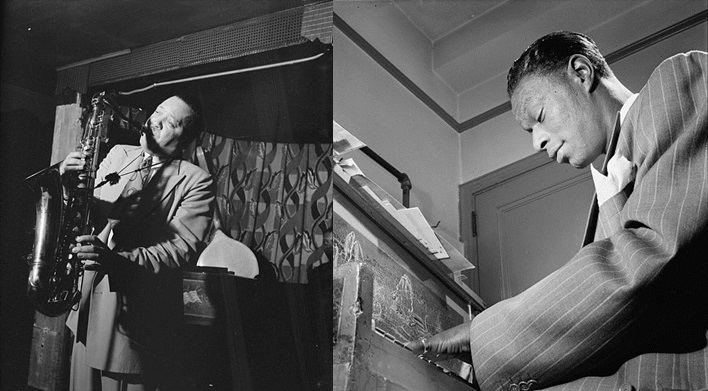 One of the coolest things for we lovers of jazz from the 78 rpm era is stumbling across unexpected combinations of great players who were rarely found together in a recording studio.  When we find them, these uncommon match-ups can surprise and delight.  As I hope you are about to find.

I have written before about Lester Young in the context of the early Count Basie band and about Nat King Cole with his trio.  But I spent many years unaware that they had recorded together one 1942 summer day in Los Angeles.  It was only fairly recently that I was on a Lester Young kick and bought a CD containing a collection from across a wide swath of his solo work.  And there it was, one session with an output of four sides.

I should try to get across how often those old-timers recorded.  Instead of modern musicians who will work for months and months on an album and are really power players if they put out more than one album a year, those old jazzmen were in the studios almost constantly in a series of ad hoc groups that came and went depending on who was available.  And who needed the dough.  And there was no obsessing over perfection and layering of multiple tracks.  Studio time cost money and these guys were pros who could churn out one good record after another.

And “sides” were what they recorded then – as in sides of a record.  In those pre-tape days the original masters were soft discs made of acetate or some similar material which were then metal-plated and used to make “negatives” which were, in turn, used to press the copies made of a brittle shellac compound.  There is a fascinating 1937 short film on the making of records which you can view (here).

One side of the common ten inch 78 rpm record was good for about three minutes of music.  Then there was the less common twelve inch format.  These larger discs were most commonly used for classical music due to their longer play time – right around five minutes per side.  They were not, however, frequently used for popular or jazz records.

But back to my CD.  As I mentioned up front, I had never been aware that such recordings existed – four twelve-inch sides recorded by Lester Young (nicknamed The President of the tenor Saxophone, or Prez for short by Billie Holliday) and Nat King Cole on July 15, 1942.  This session, produced by Norman Granz, a well known name in jazz who later formed the Clef record label, also included Red Callender on bass to fill out the trio.

I was only going to pick one out of the four songs to share with you.  However, the source for this session that I found on YouTube gave us two of them together – so you get a bonus at no charge.  (Back Home Again In) Indiana is the first side, followed by I Can’t Get Started.

Lester Young had a thing for Back Home Again In Indiana, having recorded it many times in his career.  And I Can’t Get Started is a fabulous old standard probably recorded most famously by trumpet player Bunny Berrigan and his orchestra in 1937 ( on another twelve inch disc).  Which is another record I should feature here, as I think about it.

There isn’t really much to say to guide you through these two recordings.  Both are thoroughly wonderful tunes played by thoroughly wonderful players who perform thoroughly wonderfully.  Poor Red Callender, he does such a nice job of laying down a rhythm for the other two but will be forever overshadowed on this session.  He should not be, however.  At just twenty-six years old when these recordings were made, he would go on to become a well known jazz bass and tuba player.  Even more interesting, in later years he would play electric bass as a  member of that group of top Los Angeles session misicians known as The Wrecking Crew, which was behind many of the top hits played on 1960s pop radio.

Indiana is taken at a mid tempo with Lester taking the lead backed by Cole doing his best Count Basie imitation as a rhythm pianist – only playing more notes.  I simply can’t get enough of the way Young plays that tenor sax.  Listen to the way he attacks a note.  Sometimes he bends into it, sometimes he goes into it with a trill, and other times he just hits it straight-on, all seemingly without rhyme or reason, but in an impeccable balance that doesn’t sound like a pony with a single trick.  The guys then switch it up with Cole going solo.  Really, I don’t think there is another jazz pianist of any era who combined the ability to cover the entire keyboard but to do so in a way that was never anything other than toe-tappingly-listenable.

Young eventually comes in to share a little back and forth with Cole – a conversation, really.  You can listen to this over and over and both of these guys just continue to find new ways of dancing opposite the melody.  You (I, at least) get to the end and wonder where the time went.  You get the feeling that but for the limits of the technology these guys could have kept up at these two pieces of music all night.  As much as I have a sentimental crush on Jim Nabors’ singing the song before the start of the Indy 500 for all those years, I will take this version any day.

I Can’t Get Started is taken at a slower tempo.  Lester Young always started his ballads in a pretty straightforward way, never losing the tune.  Young reportedly would never play a ballad unless he knew the words, and his playing certainly captures the lament of the guy who just can’t get anywhere with the girl for whom he carries the torch.  Nat Cole takes liberties immediately when he takes over, but because his work on the keys is so melodious, we just don’t care.  Lester wanders farther from the strict melody once he comes back, but again it is hard to imagine these solos taking a better direction once you have heard them, and they are never the least bit predictable as could have been the case with guys less skilled than they.

One final word about the recording quality.  This was clearly not done in the studio of one of the big record companies, which sounded better than this even in 1942.  It is, however, a good thing that these independently-made records have survived in any form at all, and the slow speed of the scratching in the background would seem to indicate that the master discs were the source of these reproductions rather than a simple re-playing of one of the 78 rpm copies.

Most of Lester Young’s prewar work was with the Count Basie band or as part of the combo  (often with pianist Teddy Wilson) backing Billie Holiday during that same period.  Young was always an odd dude, probably the original hipster.  He wore a pork pie hat and played his sax at an odd angle, often with his neck hunched to one side.  It is he who is often credited with being first to call money “bread” and a musician’s instrument an “axe”.  The laid-back Basie was said to have fired Lester one night in late 1940 after Young refused to show up to play on Friday the 13th.  It was just Lester being Lester.

I love Lester Young but I really love his prewar stuff.  Lester changed his sound a bit after the war, giving it a bit of a rougher edge.  And it did not help that he eventually dulled his playing through too many years of alcohol abuse.  His early playing, however, is simply beautiful.  Never did anyone else play with such smoothness and certainly nobody matched the playful and unconventional ways he put that gorgeous tone to work.

Nat King Cole played a simply brilliant jazz piano and I have lamented in this space previously that he later chased fame and fortune with his unique voice.  As much as I love his King Cole Trio recordings that would become popular the following year, Lester Young’s incomparable tenor saxophone brings something to this party that cannot be denied.  Jazz combos often have a weak link, someone who is not quite as good as the others or whose style clashes, if only a little.  There is none of that here.

I know I promised to bring you some better known pieces instead of the more obscure stuff, but jeeze, I could not live with myself if I did not share these with you.  If you will permit yourself five minutes to play the first piece, I guarantee that you will listen to the second one, or your money back.

If I could go back to 1942 and be part of that music scene, I would have worked awfully hard to make sure that this group reconvened many more times to record hours and hours of this magic.  Sadly I do not believe that these three ever recorded more than these four twelve-inch sides (Tea For Two and Body & Soul were the other two, which are just as good as these.)  Sometimes you really can excavate your way to the very bottom of one of jazz’ many smaller wells.  Oh how I wish there were more from this group. (1)

Some of us remember the Summer of ’42 as nothing more than a bad movie from the early ’70s.  These records attest that that long ago summer gave us something else with some real lasting value.

Note (1): In the interest of full disclosure, there were a couple of 1946 studio sessions which yielded an album called either The Lester Young Trio or the Lester Young  Buddy Rich Trio, depending on the release.  Nat King Cole played piano on that session but because he was under contract with Capitol Records and a big name by then, he is credited on the original release as “Aye Guy”.  Two things separate the 1946 recordings from these featured here today.  First, Young’s tone is harder and not as much to my taste.  Second, the third member of the trio is a drummer, not a bassist.  Let me be clear: the 1946 sessions are very good.  These from 1942 with Red Callender are perfection.