Do you remember your very first record album?  To even say “record album” surely dates me to an era long before the advent of the compact disc.  And by your first, I mean the one you bought with your own hard-earned money.  For me, it was when I was in second grade.  In the early spring of 1967, I saw the country’s hottest album in the store and simply had to have it.  I begged my mother to buy it for me and when she demurred, I reminded her that I had plenty of loot saved up at home and would happily pay for it myself.  She agreed (much to my surprise), and thus allowed me to check off one of life’s necessities – having at least the very beginnings of my very own record collection.  That day also began many months straight of everyone in my family being subjected to More of the Monkees.

For you younger readers, the Monkees were a brief phenomenon of the mid 1960s, wherein some guys with suits and cigars auditioned for four random (but telegenic) young guys as a way to cash in on the teen music scene.  Although they were ostensibly a rock and roll band, the “Prefab Four”  was primarily a TV show about a rock and roll band, positioned to spin off every kind of marketing opportunity imaginable.

In my grade school of 1966-67, the Monkees were everywhere.  They were on lunch boxes, on comic books, in toys and of course on the must-see weekly show.  And the hit singles from their first album were staples of AM top 40 radio, which played frequently through the single dashboard speaker of my mother’s Oldsmobile.

As time went on and my tastes matured, I became embarrassed at my first musical choice – how childish it was, a sort of prequel to Milli Vanilli in that the group’s mostly-modest instrumental talents were almost wholly absent from the songs played on the air.  My musical preferences transitioned to jazz, where top-flight musicianship routinely outranked the more commercially appealing stuff.

But I recently discovered that I was at least a little bit wrong.  True, the Monkees did little of their own music, but what was on the records was not all the collection of random hires from the musician’s union as I had suspected.  Some of those early Monkees tunes were actually the products of some of the best rock & roll musicians of the 1960s, a loose aggregation of players informally known as The Wrecking Crew.

If you are not familiar with The Wrecking Crew, you owe yourself that treat.  I recently watched a documentary on the group  and discovered that the musicians I soaked up from my first album were really much more than the Monkees.  These were the musicians who provided a substantial majority of the soundtrack to my early life. The documentary is called The Wrecking Crew, and currently available for streaming on Netflix.  If you are at all interested in music, you simply must see it.

The Wrecking Crew was an elite group of “first call” musicians who worked the recording studios in and around Los Angeles, which had become the epicenter of popular music by the mid 1960s.  In contrast to the older generations of studio musicians who were jazz stalwarts, these young turks were of a tweener generation that was schooled in jazz but who became the go-to players as rock & roll took over.

The Wrecking Crew was the backbone of the west coast hit-making colossus of the ’60s, and was seemingly everywhere until well into the 1970s.  They were Phil Spector’s “Wall of Sound” behind his many groups like the Ronettes and the Crystals.  They backed Sonny & Cher, The Mamas and The Papas, Nancy Sinatra and Simon & Garfunkel.  Or, they could switch gears and accompany the likes of Nat King Cole and Frank Sinatra.

Of course, we always knew that there were nameless, faceless musicians backing popular singers.  What we didn’t know was that when we listened to the records of Jan & Dean, The Association, the Grass Roots, the Fifth Dimension and the first two releases of The Byrds, we were really listening to The Wrecking Crew.  They were also Paul Revere’s Raiders, Kenny Rogers’ First Edition and Herb Alpert’s Tijuana Brass.  And we certainly didn’t know that they recorded almost all of the Beach Boys albums, including the 1965 masterpiece Pet Sounds.

If you were watching TV instead of listening to the radio, the Wrecking Crew was still front and center, bringing us theme songs from Hawaii Five-O, The Munsters, Get Smart, Bonanza, Batman and more others than I have room for here.

But back to The Monkees.  Or actually, back to the film about the musicians.  As some of the instrumentalists were discussing their work with (or actually “for”) The Monkees, the film offered a brief sampling of my favorite song from More of the Monkees: Mary, Mary, which was the third track on side 1.

Recorded in July of 1966 at Western Recorders studio in Hollywood, Mary, Mary was one of the few tracks on which any of the Monkees actually had some fingerprints, with Mike Nesmith having both written and produced the song. 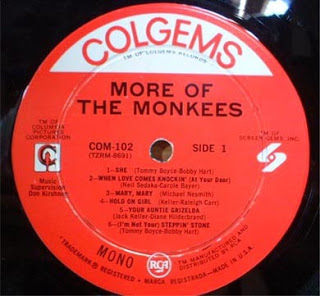 The session personnel would be duplicated on thousands of sessions in dozens of studios over many years, but this date featured the guitars of James Burton, Glen Campbell (yes, that Glen Campbell), Al Casey and Mike Deasy (in addition to Peter Tork, the only Monkee who might have been allowed to hold an instrument on this session.)  Actually, while some sources say that Tork played acoustic guitar, the union contract for that date notes that Tork was the only non-member of the union, which makes me doubt that he played at all.  Could he have been there solely for album credit and professional respect?  That is a question for those who have time to dig much further into this bit of trivia than I do.

Also playing were Larry Knechtel and Michael Cohen (piano), Bob West (bass), Jim Gordon & Gary Coleman (percussion) and the incomparable Hal Blaine (drums).  Blaine, it should be noted, may be the most recorded drummer in history, and counts among his credits playing on six consecutive winners of the Grammy Record of the Year Award from 1966 to 1971.  The only things keeping this session from featuring the entire first squad of the Crew were the absence of Tommy Tedesco’s guitar and Carol Kaye’s bass.  But with those exceptions, seven year old me was unknowingly treated to the work of some of the top west coast rockers of 1966.

Just take a listen to the track (which I have linked here for your musical education).  Once you get past the stupid-simple three chord arrangement and the Micky Dolenz’ vocal (which was not completely terrible) and listen to the music going on behind him, it will hit you just how good those guys were.  Although I am far from qualified as a rock critic, even I can tell how the two lead guitars simply sparkle, with enough improvisation to fill in the dull spots, but not so much as to overshadow the vocal.  Down low, the bassists and rhythm drive the thing like mad.  These guys played together all the time, and it showed in this track.  There was nothing ragged or sloppy going on in that studio.  This track is polished and crisp and even playful.  And all before the ability to electronically clean up and edit a recorded performance.

Look, I know that this isn’t great music by any stretch.  But there is certainly something to admire here.  It is sort of like a sirloin steak vs. a hamburger.  You expect to be impressed by a good steak.  However, when someone can take supermarket ground beef, a white bun and a pre-wrapped slice of Kraft “cheese” and turn it all into a truly good hamburger, that is something that not everyone can do.  This session took some really basic ingredients and made a really, really tasty experience for us to listen to, that I think still holds up quite well fifty years on.

The album was released on the Colgems label in early January of 1967, while the group was on tour, with no idea that the project was even in the works.  In fact, Mike Nesmith, stung by the way others had recorded and released music under the group’s name, called it one of the worst albums of all time.  Despite the ill feelings between the band members and musical director Don Kirchner, the album was number 1 in the charts for eighteen weeks and eventually sold over five million copies.  I was surely not the only second grader to buy one.

In listening to some of the other tracks again (for the first time in a  verrrry long time), I can perhaps say that Nesmith was not altogether wrong.  The album is really a mongrel composed of several disparate sessions which were already “in the can” for likely use in the TV show.  Only four of the twelve tracks involve The Wrecking Crew, and three of them are songs that not even musicians of their caliber can save.  There were some New York sessions involving Brill Building alums like Neil Diamond, Neil Sedaka and Carole King. The rest were from another group of L.A. sessions which finished out the band’s early role as alter-ego for Tommy Boyce and Bobby Hart.  These sessions involved an entirely different group of studio players (whose playing or enthusiasm rates, in my estimation, a notch or three down, with the exception of sole Wrecking Crew member Louie Shelton on guitar).  So let’s just say that if you are looking for noteworthy output of the Wrecking Crew on this album, the sole track of Mary, Mary is about as far as you need to go.

Another curiosity that Mary, Mary was never released as a single in the U.S., because it certainly sounds as though it should have done quite well, a top 20 at least.  It was, however, released as such in Australia in 1968 where it became a top 5 hit.  Did the band’s management conspire to keep Nesmith’s sessions off of the radio and out of the big money?  Given the bad blood brewing between them in 1967, this is not an unlikely scenario.

After this, I am both disappointed and vindicated, all at the same time.  Disappointed because for a moment, I thought that my first album would be a front-to-back display of the stellar musicianship that was The Wrecking Crew.  But no.  Still, my first music purchase is not a complete bust to this aging baby boomer, because there is at least one song on it that I can play too loudly from the stereo in my top-down Miata and still hold my head high (I’m not completely without standards).  And now that I know where more of the Crew’s output is to be found, I can listen afresh and start to appreciate their work in a way that I couldn’t before.  And now, so can you.

10 thoughts on “Wrecking The Monkees”