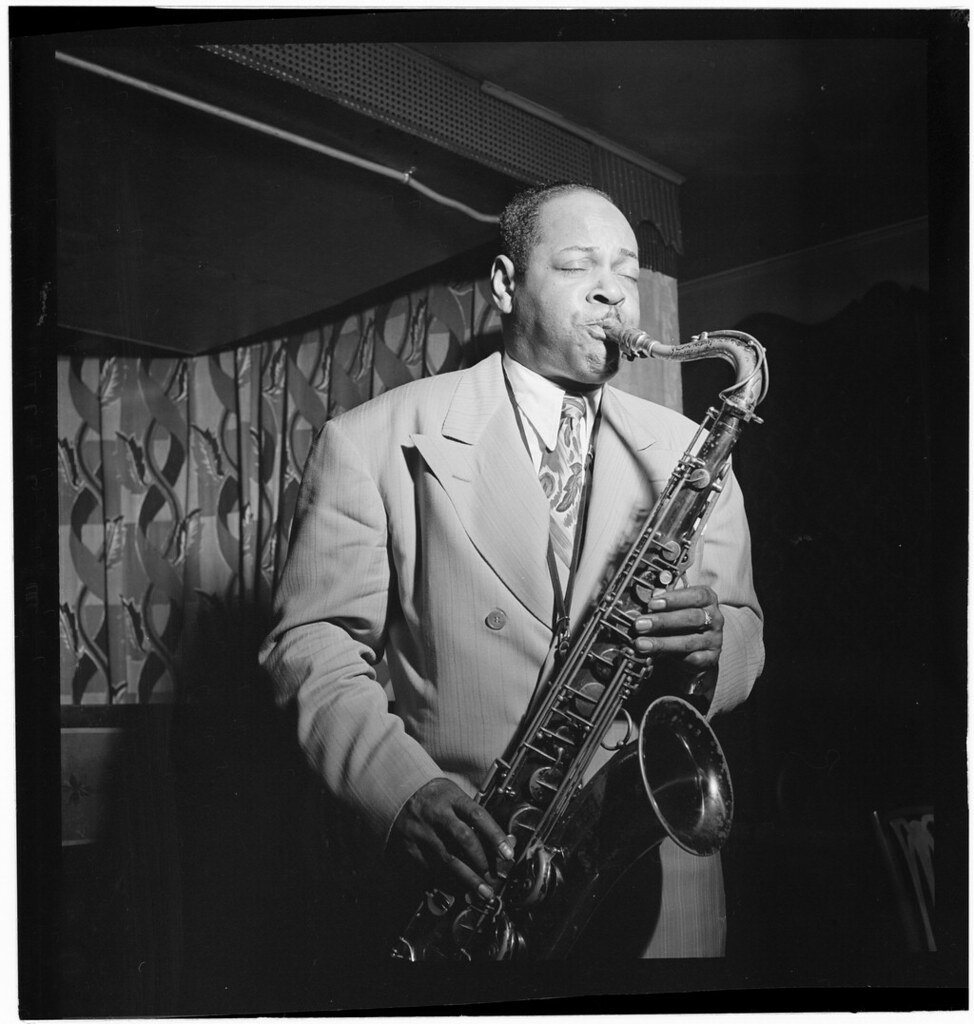 Remember when you were in school and wanted to take a class, but were prevented because you lacked a prerequisite?  Well that works here too.

I was all ready to write a piece on a bit of jazz music.  It featured a saxophonist that I was going to describe as very much in the tradition of Coleman Hawkins.   But then I thought for a moment, and wondered how many who read this know who Coleman Hawkins was?  You don’t need to answer, just sit quietly, read and listen, and you will be able to impress your friends.

The tenor saxophone has been perhaps the most iconic instrument in 20th century jazz.  How did it get that way?  It could very well have been because of one guy: Coleman Hawkins.

Hawkins was born in St. Joseph Missouri in 1904 and was of the generation that came to prominence in the 1920s as recorded jazz music was really hitting its stride. Early jazz relied on the trumpet and the clarinet for most of its vitality, with smaller saxophones like the alto and the C-melody being the most common as a solo horn.  Hawkins preferred the larger, deeper tenor saxophone, one which he would employ for the next forty-plus years as a leading figure in jazz.

And wouldn’t you know it, once others were exposed to Hawkins playing the tenor they wanted to play it too.

His first leap came in the mid ’20s when, after listening to Louis Armstrong in the Fletcher Henderson band to which both belonged, he took saxophone solos to a new level in terms of crafting a composition within a composition, instead of just playing notes.

And as the swing era got underway he remained at the top of the heap until bebop started to bubble up from below the surface.  And when it did, Hawkins was right there with it, helping the new style through its early birthing stages.  Few influential players of the 20’s maintained their prominence in the swing era, and fewer still remained at the crest of the wave into the bebop years – Miles Davis once said that he learned to play ballads by listening to Hawkins.

From the mid 1930’s until the start of the bebop era after the war, there were really only two tenor sax men for a young player to emulate.  You either played like Lester Young (whom we have featured before) or like Coleman Hawkins.  And Hawkins came first – by about a decade.  In fact, the only reason people paid attention to Lester was because he played so differently from Hawkins.

What was the difference?  Young played in the higher ranges with a light, airy sound that retained currency for a long, long time (think of The Girl From Ipanema by Stan Getz) – it was a sound that was notable because it was so different from Hawkins, who played with an earthy, full-bodied, masculine kind of sound that could be either mellow or hard, but was always unmistakable.

He had a couple of nicknames.  Hawk, of course was one.  The other – Bean – was due to his intelligence.  Having had a year or two of college in which he studied some music theory, Hawkins had the ability to “think his way through” chord progressions and harmonies which took his solos to places most players would fear to enter.

Hawkins spent a decade with the great Fletcher Henderson orchestra before leaving in 1934 to tour with a series of groups in Europe.  He returned to the U.S. in 1939 and spent the next decade with some of the most modern and influential players in jazz.

So how do you showcase Coleman Hawkins?  Some of his great records with Fletcher Henderson in the late 20’s?  His groundbreaking 1939 solo record of Body and Soul which goes beginning to end without playing the actual melody?  His big band of the mid 40’s that some call the birth of bebop?  Any would be a reasonable choice.  But in my quest to remain as unpredictable as possible, I chose a 1950 recording which pairs and contrasts Hawkins with the early king of the bebop alto saxophone – Charlie Parker.

Remember where I said that there were two schools of saxophone players?  Parker was the guy who started the third – perhaps the most influential saxophonist in the years between wars in Europe and Korea.  His nickname, incidentally, was Bird. 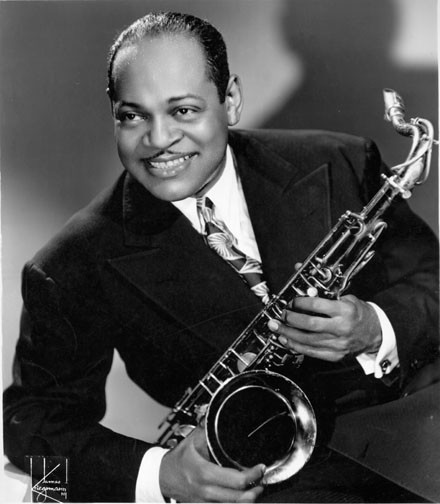 The contrast is noticeable.  By the time of this 1950 effort Hawkins had been playing professionally for nearly thirty years, one of the true heavy-hitters in jazz of the time, someone who had inspired a generation (if not two) of young sax players.  Parker, on the other hand,  was in the midst of a fast rise in popularity as bebop took hold.

I do not intend this as a feature piece on brilliant and tragic Charlie Parker – his time will come.  But Parker’s spooky ability to play runs of notes that were like an out-of-control rocket while still maintaining the rhythms and harmonies that kept the song together contrasts clearly with Hawk’s deep, old-school lyricism.

This recording is an interesting story all by itself.  Jazz promoter Norman Granz was a pivitol figure in postwar American jazz.  In addition to forming five separate record labels, he began a series of recorded concerts called Jazz At The Philharmonic beginning in 1944.

Granz also produced a 1944 short film called Jammin’ The Blues, which was nominated for an Academy Award in its category.  Jammin’ The Blues is available on YouTube in its 9+ minute entirety (and is a great opportunity to watch Lester Young in action).  Granz began a follow up project in 1950 which was to feature Coleman Hawkins and others.

Unfortunately, the project was never finished but some of the film footage survives – including that of this recording.  And in case anyone thought that syncing to a previous recording was new with Milli Vanilli or Britney Spears, you would be incorrect.  The audio for this piece was recorded a day earlier and the players were filmed in their attempt to recreate that earlier performance.  Which may explain some of Parker’s smirking.

Anyhow, I will offer this song up both ways – in its film version so that you can see the players,

and as the audio track which has been released on multiple albums over the decades – though usually to feature Charlie Parker.

The title – Ballade – is one that comes from classical music.  Which took it from poetry, where it means a poem in three stanzas. This piece sort of has three “stanzas” with opening and closing solos from Hawkins, broken up with one in the middle by Parker.

The contrast in their sounds and styles is evident.  Parker’s smaller alto sax plays in a higher range than Hawkins’ tenor.  Also notice Hawkins’ pronounced vibrato where Parker plays in a plain style with very little wavering in the tone.  And that style difference – old school vs. the new wave – showed some of the best of their respective practitioners.

Really, it is hard to think of two players of such distinct eras who could have blended better.  Parker the bebopper could bring out the soul of a ballad while Hawkins had a complexity to his style that was always a few years ahead of most of his contemporaries.  In this recording they find a place where the old and the new come together beautifully.

Coleman Hawkins became less of a musical influence as the 1950’s wore on and bop continued to evolve.  He settled into the role of the elder statesman who was always in demand at recording sessions.  He continued to record through most of the 1960’s, though his health began to fail as his drinking picked up during that decade.  Hawkins died in New York in 1969, about two years after his last major recording.

That final record was a compilation of two live performances from March and July of 1967.  The names of those who played with him were from the A list of their era, such as Oscar Peterson, Johnny Hodges and Benny Carter.  The company Hawkins was able to keep right to the end tells us all we need to know about his contribution to jazz.

July 1947 photo of Coleman Hawkins with Miles Davis at the Three Deuces in New York. Donated to the public domain by author William Gottlieb.

Publicity photo of the Coleman Hawkins Trio as it played in Europe in the late 1930s.  Copy found online via the United States Memorial Holocaust Museum.

Publicity Photo from c. 1945 from an ad in Billboard Magazine.  Source – Wikimedia Commons

Photo of unknown provenance of Coleman Hawkins in the early 1960s, found at freshsoundsrecords.com