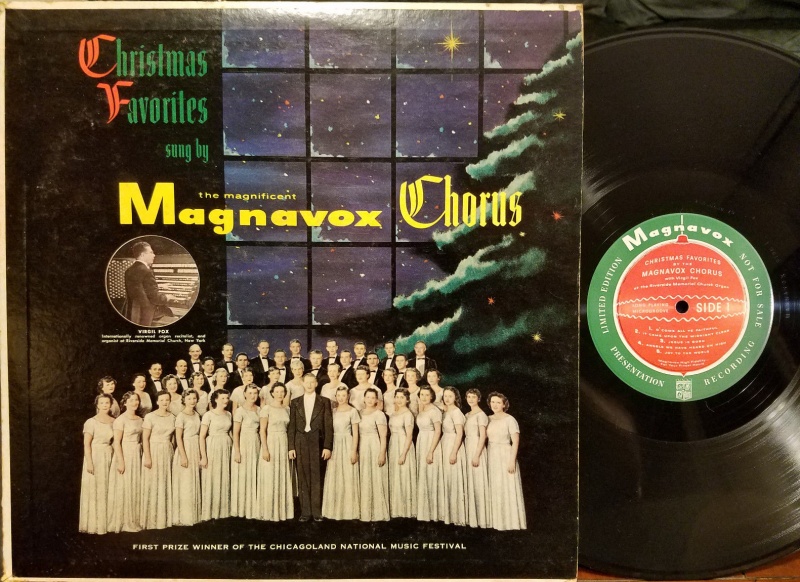 It is a week before Christmas and there is going to be way too much to do by the time my Friday morning post goes live. In something like four and a half years of doing this I have yet to resort to a rerun, and am not about to do so today.

In years past I have featured a selection of Christmas music to share with you. This year will be no different. Except for the musical selection, which is of a kind I have not featured before.

At my house I am the designated present-wrapper. Mrs. JPC has many talents, but as it has turned out, her wrapping skills are, shall we say less developed. Or maybe she just found a clever way to get out of that job. In either case, sitting down to a pile of items and multiple rolls of gift wrap requires some Christmas spirit. Not spirits, that would make things worse.

I do my wrapping in our basement family room. This turns out to be the one time of year when I fire up my elderly turntable and spin some seasonal vinyl. One selection has elbowed its way in front of all the others and has become my annual Christmas go-to.

A number of years ago, a friend was cleaning out his mother’s house after her death. He always described himself as the only child of two only children, so he was of necessity a one-man show in dealing with his mother’s things. He was in the later stages of the cleanup and offered me anything I wanted there in exchange for my assistance. My friend’s mother was a saver, and took excellent care of her things. I flipped through some old records she had owned and kind of threw this one in as an “oh, well, if it’s here I may as well . . . . ”

I was well familiar with this record in my youth, as there were easily dozens of copies available any time I pawed through the selections of castoff vinyl at the local secondhand thrift stores. Because Fort Wayne.

I grew up in Fort Wayne, Indiana. At that time it was home to quite a few large employers. Lincoln National Life Insurance had its home office there and International Harvester had a huge manufacturing presence. Another local mainstay was The Magnavox Company.

I got a good dose of Magnavox after my Uncle Bob went to work there in the early 1970’s. We used to get our televisions through Uncle Bob and were a dedicated Magnavox family for a long time. You probably did not know that Magna Vox is latin for “loud voice”. Now you do.

I knew that this disc had to be a local effort, which surely explained why this one fought with records from Firestone (the tire company) for the most popular unwanted holiday album in the used record piles.

There is incredibly little information online about this disc. According to the liner notes, the Magnavox Chorus was formed in 1954 in the way that so many large groups used to form at companies across America in that day and age. The Magnavox Chorus did well in some competitions and it seems that the decision was made to record some music.

The disc itself is labeled “not for retail sale” so my deduction here is that someone in the advertising department decided that a recording by the company’s own chorus would be a great premium to throw in with holiday hi-fi sales. The date on this effort is unclear to me, but from the look of the cover and the label I would be surprised if it was any newer than 1957, and very likely earlier. The YouTube channel where I found this copy says 1956, which I do not doubt a bit.

It is pretty clear that the Chorus did not have enough material to fill a full twelve inch long-play record. It also seems clear to me that some small custom-project recording studio added some organ music between the selections to fill out the playing time on the disc.

That Organ music may be the most findable outable thing about this record. Virgil Fox was known in the 1950’s as a top organist – particularly for an extremely florid playing style that always chose drama over authenticity when playing period music. But I think this dramatic playing just adds to the retro experience.

I should add here that I grew up attending a Lutheran church in Fort Wayne. And if there is one thing that Lutheran churches are known for (other than Jello salads at pot luck dinners) it is huge and impressive pipe organs. So I will just put out there that I do love a good pipe organ, and never more than when a player “pulls out all the stops” (did you know that’s where this expression came from?) and unleashes all the power the thing can muster. The instrument at Riverside Church in New York was an impressive one and has the power to give a nostalgic guy some goosebumps. Especially in the final selection on each side, Virgil Fox does not disappoint.

Another thing I love about this record is the song selections. I wrote last year about my disdain for what passes for Christmas music today. Well none of that dreck is included here. I realize that many younger than me have never heard some of these old chestnuts, and even I was unfamiliar with a couple of them. Old-school “Christmas Carols” tug mightily at my nostalgia strings and I delight in them as I wrap presents.

Finally, I love this record because it temporarily immerses me in a world that no longer exists. The local company with a chorus made up of folks from the office and the factory floor, the classic simplicity of blended voices performing songs that nobody performs any longer because they have gone terribly out of style. There was no need for flashy effects or over-the-top presentation. It was a simpler time which was far from perfect, but had some things to recommend it. The result is one of those records that can be listened to over and over by someone who appreciates it for exactly what it is – a Mid Century, Mid Western celebration of the classic Christmas carol.

I had best finish this because I still have some gifts to get wrapped. I think you know what I will be listening to.

Audio of album from the YouTube page of Christmas Records, the place to go if you want to get lost in holiday obscurity

Lead photo from an identical album offered for sale at popsike.com

Photo of Magnavox Corporation in Fort Wayne – From the online Community Collection of the Fort Wayne Public Library, sharing permitted as an educational use (Lord knows I make no money doing this).

1958 Magnavox television ad from an offer for sale on eBay.com

1947 Magnavox ad from an offer for sale from adclassix.com

14 thoughts on “Christmas The Magnavox Way”