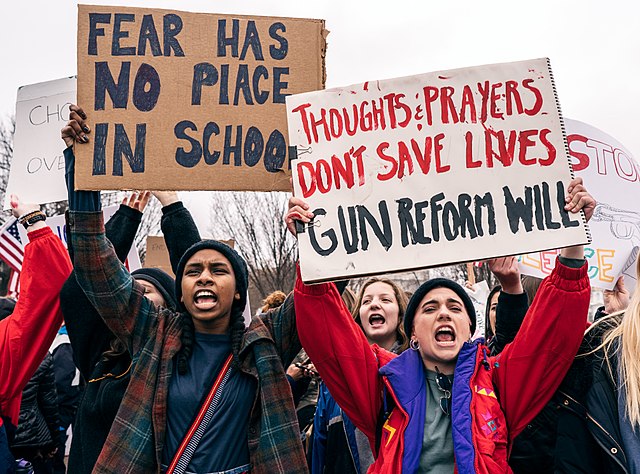 Photo source: Laurie Shaull via Wikimedia Commons. No changes were made to this image. The original image may be found at https://en.wikipedia.org/wiki/File:Thoughts_and_Prayers_Don%27t_Save_Lives_(40369207261)_(cropped).jpg

Guns.  Everyone is talking about guns.  And not for bad reasons, either.  When a disturbed young man kills many innocents in their high school, well there is good reason for the topic to come up.

When it comes to gun owners in the U.S. there seem to be two groups of people.  There are normal, sane, stable people who keep a gun or three around the house for protection or who like to hunt or who enjoy target or sport shooting.  Then there are the criminals and predators and insane whackjobs who use guns in furtherance of their crimes or to hurt others.

The first group of people would seem to be no threat and its members get upset when others want to take their guns.  “We’re not hurting anyone.  Why do we have to pay for what those others are doing?”  It’s like when we were in grade school and everyone lost privileges when one or two kids caused a problem.  We all remember the occasional “OK, nobody gets recess today! thing.”  It just doesn’t seem fair.

The second group is, of course, an obvious threat and needs to be dealt with because they are the ones who put the rest of us in danger.  The guns take dangerous people and make them more dangerous.  But what is the best way to minimize the threat these people represent?  The knee-jerk answer today seems to be “outlaw the guns”.

I am not a member of the NRA and am not all that interested in firearms.  I am not a hunter but know others who are.  I have shot targets or skeet a handful of times, but it has been a long time ago.  And this is pretty much everything I personally bring to the debate.  You may also find it strange that an attorney is not addressing Constitutional issues in this piece.  These are, of course, serious issues but they are not the issues that everyone is debating today.  Which I see as another problem, but it is a problem beyond the scope of today’s Big Issue.

The Outlaw Guns argument makes me ask questions.  There are many big cities where guns are actually or practically outlawed.  Criminals and crazies seem to find ways to them anyway.  Yes, I suppose it is easy to smuggle guns in from the countryside or across state lines.  But will outlawing them in a wider area change this?  Other than to push the border of availability farther out as, say, Canada or Mexico countries beyond?  Drugs like cocaine and heroin have been outlawed in the U.S. for decades.  There seems to be no shortage of them here, however, and pretty much all of the stuff comes from outside the country.  I have a hard time seeing how the government will be more successful keeping firearms away from those determined to have them.

Another point that is not being discussed much is this.  It seems to me that the idea of outlawing guns requires this presupposition: That legitimate authority (ie, government) will protect us from bad guys or the criminally insane if we are prevented from using firearms to protect ourselves.  But is this a reasonable assumption?

In the recent school shooting in Florida governments failed the students in that school multiple times at multiple levels.  I have lost count of the stories I have read about how those in the young shooter’s circle reported his instability and obsession with guns and violence to authorities at both the federal and the local level.  Some of these stories are quite chilling.  Was he a danger to others?

There were laws and procedures which would have authorized an arrest or a temporary commitment for evaluation and treatment.  Either option should have resulted in confiscation of the young man’s firearms.  He clearly was a danger and many in his circle of acquaintance knew it.  But somehow everyone in authority seems to have missed the threat.  Or decided that it was kinder or safer to leave him alone.

He was reported to the FBI, specifically, by name, and with many examples of why he was dangerous.  Inexplicably, the FBI failed to refer the report to the local office for investigation.

And even the last resort failed.  The school had armed security on site in the person of a sworn law enforcement officer.  Armed security which, sadly, seems to have hidden safely outside while unarmed students inside were shot one after another by the madman with the gun.

“Government”, it seems to me, failed both repeatedly and spectacularly at its job of protecting innocents from a nut with a gun.  It failed in getting the nut diagnosed and treated, it failed in getting him identified so that his guns could be taken away (which is already the law) and worst of all it failed in its core function of repelling force with force by failing to confront the shooter.  But we are told that these same levels of government can be trusted to keep guns out of the hands of criminals and gun-fetishistic crazies while it takes guns from “normal” citizens who would hand them over voluntarily because those are the rules?

After a tragedy of any  kind here is a universal tendency to look to the government and to scream “DO SOMETHING!”  I sometimes wonder if fully half of the laws on the books are knee-jerk reactions to some tragic situation where a the bad guy ignored laws there already.

I once worked with an attorney who was far more politically liberal than I was.  However, whenever some kind of terrible crime hit the news, his tongue-in-cheek response would be “Let’s Make It Illegal!”  Did a complete whackjob get a semi-automatic rifle and walk through a school killing unarmed students?  Let’s pass a law to keep that from ever happening again!  I can understand a certain satisfaction from “doing something” but do we really think that this will prevent future attacks?

It also seems to me that there are some bigger questions that need addressing.  Care for the mentally ill has been a low priority for governments at all levels, leaving the problem to the families of the afflicted, folks who are often ill-equipped for the job.  Does anyone doubt that the incidence of serious mental illness is decreasing, what with the rampant drug use, poverty and family breakdown we have been experiencing over the last generation?  There has to be a better plan here than to do nothing after one with a dangerous mental instability refuses care or treatment.

I am all in favor of preventing the next school massacre and making the recent occurrence in Florida the last we ever experience.  I am just not yet convinced that “ban the guns” is going to actually accomplish this.  Oh, it is “an” answer, to be sure.  But is it a cheap answer that will only expose the next failure point in our legal system and in our fracturing society? Because if the next mass killing is simply carried out by an outlawed gun (or by some other method) then perhaps it is not really an answer at all.

This is a raw and divisive topic today so I think it a good idea to remind readers of the comment policy here.  Strong feelings and deeply held beliefs are expected.  Comments of that kind, including those which may disagree with those expressed here by me or by other commenters, are encouraged so long as they can be phrased respectfully.  Name-calling and ad hominem attacks are not OK.  In other words, I want to hear from you, even if you disagree.  Just remember that everyone in the discussion is a real person who is entitled to the same kind respect that is also due to you.