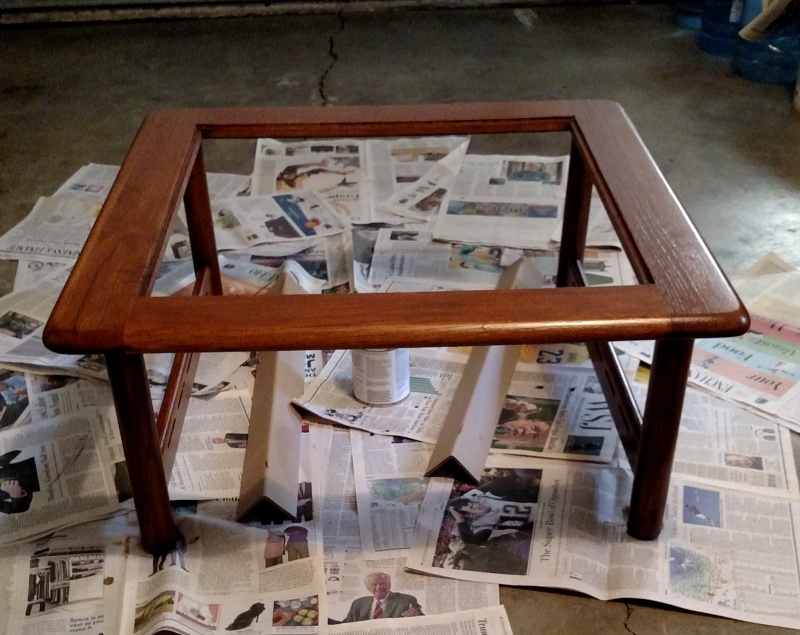 There is a coffee table in my garage where Mrs. JPC’s minivan normally parks.  Or more accurately, it is not so much a coffee table as it is a project.  And it is what is becoming my favorite kind of project – someone else’s.  It is, however, a very satisfying one.

A little over four years ago I captured some fleeting thoughts that bubbled up from one of the many moves of a kid to a college apartment.  Let’s see – three kids, four years each, yes that was a lot of those moves.

Time has passed and my youngest (and only daughter) has been out in the workforce for over a year.  Though she has been out on her own, she has been in a transition from one set of roommates to another and has been in a short term layover at our place as the new plans come together.  One of which is a coffee table.

This was a cast-off from a neighbor, one of those pieces of furniture you pick up because it fills a need in a college apartment full of cast-offs from multiple families.  There are families who send their children off to high-end housing full of new furnishings, but we are not one of those families.

My daughter had taken a liking to this old coffee table, a large square one with a glass insert for the top.  It is getting a new lease on life via a refinishing.  And because old Dad has picked up a little experience in this over the years, I was invited to a seat at the (coffee) table.

I don’t know where I learned how to do wood finishing, I think I just started.  I was a single guy when I bought my first house, a two bedroom bungalow that had been built during the Coolidge Administration.  Yes, ancient history – Calvin Coolidge was the President of the U.S. through most of the 1920’s.

Anyhow, my old house had been built in the era of great swaths of varnished woodwork which had been painted in later years due to changes in tastes and styles.  Being a lover of originality I began the long project of stripping many layers of paint from woodwork and replacing it with the dark, glossy finish that I had seen in so many homes from that era.

I never did get all the way through, but I made serious headway on many linear yards of oak baseboards and even a pair of window sashes in one bedroom – a big project, those windows, with their multiple small panes of glass that were all removed and replaced after I worked my polyurethanely magic.

I like projects like that – ones that require (or allow?) me to spend uninterrupted hours on something both tedious and rewarding.  This is a luxury for me.  Those hours have been spent on my present house as well.  Remind me to tell you some time about my ten louvered doors, many of which have required paint or other finishes.  Or not, it’s up to you.

This time, though, my daughter and her steady boyfriend are the ones with the project.  I am sort of the helper emeritus, someone there to offer some guidance and a little help, but who also must learn the difficult skill of stepping back to let a new generation learn these skills for themselves.  So far, so good I would say.

I suppose I am a preservationist at heart, because I really like the idea that they have chosen to take a piece of junk furniture and, through some time and effort, turn it into a feature of the living room in the apartment where it will soon be situated.

Will she (or they?) catch the bug and find other pieces to refinish, projects that may be more ambitious than this one?

Her older brother may be more typical of his generation.  He has little patience for this kind of time-suck, preferring instead the ease and modern style that comes from the new stuff that is available from so many sources these days.  Although he has not yet purchased a home, so who knows?

Anyway, the sanding is done, as is the first finish coat of the product that combines stain and polyurethane into a single coat.  The second coat will go on within the next few hours and all that will be left to do is allow it to dry for a couple of weeks before it moves to new quarters (along with a truckload of other stuff).

It remains true that each move beyond college involves bigger trucks and more stuff.  A single minivan won’t cut it anymore.  It is also true that the quality of the stuff gets better.

Another thing changes as well – the roles of father and daughter.  In terms of controlling the whens, whats and hows, Dad’s role recedes to one of elder adviser while daughter’s grows to that of Queen Of The Domain.  And both of these changes are good ones.  It is not always easy (speaking for myself, at least) to transition from Boss to Resource.  But there are rewards in watching my daughter – and her brothers – flower as Real Adults.

Which is why I will not be volunteering to handle the large piece of glass when we move the coffee table.  My default mindset (acquired over many years of practice) is “I have to do this myself to be sure it is done carefully.”  But I must become acclimated to my new role – It is neither my apartment nor my coffee table.  It is only a happy coincidence that I will not be the one blamed if the large piece of glass gets broken.  Sometimes the role of Resource has its benefits.

17 thoughts on “Musings On Life After College, Daughters And Coffee Tables”