It is not well enough remembered that in 1939 Benny Goodman hired a kid to play the electric guitar.  Charlie Christian was one of those musical flames that burned brightly for a very short time.  But he changed everything.

Benny Goodman is well known as “The King Of Swing”, the guy who kicked off the big band era in America and who took control of it for a number of years.  We have looked at a couple of examples of his big band, one in its early years (here) and another in its more mature form of the early 1940s (here).

But Goodman is known for more than just his big bands – he was a steadfast promoter of small groups as well, and this piece is about one of them.

As early as 1935 Benny Goodman would interrupt his big band performances with mini-performances by The Benny Goodman Trio.  With Goodman on clarinet, Jess Stacey on drums and Teddy Wilson on Piano, these Trio performances were unique in multiple ways.  First, they introduced fans used to big bands to the more intimate sounds of a smaller group.  More importantly, they broke some rules (actual or implied) in the music business which had prohibited white and black performers from playing together.

Although Goodman and Stacey were regular members of the band, Teddy Wilson was not.  As a black musician, there were some raised eyebrows when he took the stage.  The music, however, was first rate.  When Lionel Hampton (another African-American player) joined the group it became the Benny Goodman Quartet.

These small groups slowly grew until one night in 1939, well-known music promoter John Hammond inserted one of his newest discoveries into Goodman’s outfit (much, the story goes, to the displeasure of Goodman.) 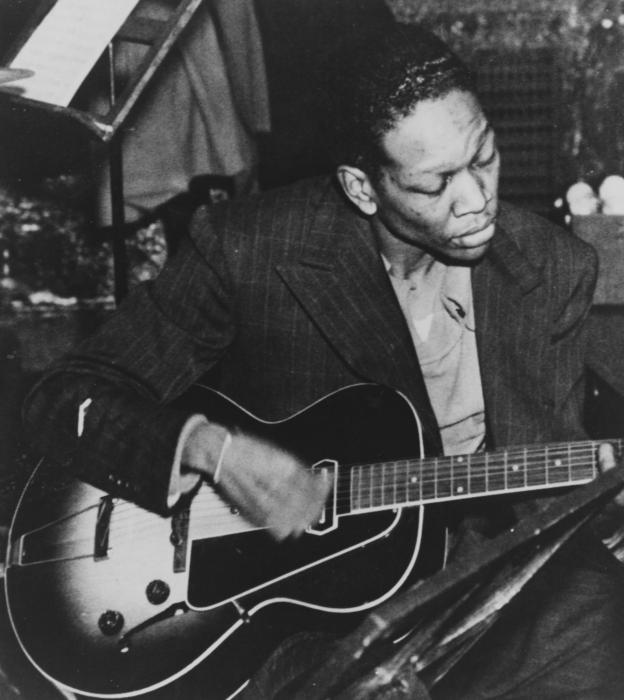 It wasn’t that Charlie Christian was black that bothered him.  Goodman had been featuring black players in his small groups for years by this time.  It was that he just wasn’t sure about this new guy.  Christian had sat for a perfunctory audition earlier in the day and Goodman had been unimpressed.  So when the leader saw Christian sitting in ready to play that evening, he was not amused.

Benny Goodman had a reputation for being difficult to work for, a reputation that was not unfair.  Goodman decided that the way to deal with this interloper was to pick a song the new guy would probably not know.  He would then be left behind and would surely slink away, never to be heard from again.  So Goodman picked an old thing called Rose Room, a piece that dated back to World War I.

Charlie Christian was born in 1912 and grew up in Oklahoma.  He learned to play guitar and, along with his siblings, was playing in the streets for tips after his father passed away too young.  He learned to play jazz from some locals and one of the first things he learned how to improvise with was – you guessed it – Rose Room.

The most common version of the story is that Christian took so many choruses of the song that first evening with Goodman that the piece ran on for forty minutes.  After Rose Room, Charlie was in the band.

This version of Rose Room was recorded by the Benny Goodman Sextet on October 2, 1939.  In addition to Goodman and Christian, the Sextet consisted of Fletcher Henderson (piano), Lionel Hampton (vibraphones), Artie Bernstein (bass) and Nick Fatool (drums).  The pace of this piece is relaxed, lazy as a calm summer evening.

Goodman leads off on the first chorus, sticking reasonably close to the melody so that everyone knows kind of how it is supposed to go.  Benny, as always, riffed off a fresh and listenable solo that sounded just right.

Charlie Christian got to solo the second chorus all by himself (with the light yet swinging bass and drums providing a solid foundation.)  With a few exceptions, the guitar had been sort of a second or third tier instrument in swing bands, usually strumming along as a rhythm piece more than anything else.  Charlie Christian changed that.

His style of playing single notes (instead of chords) and inventive phrases within the chord structure of the song were unique then and have seldom been done better in the decades since.  Because we live in a much more guitar-centric world than when this record was made, Christian’s contribution might seem a little light.  But for 1939, this was a whole lotta guitar playing on the record.

Unlike the guitar, which has become universal in music, the vibraphone has become quite rare.  It is much like a xylophone, only instead of wooden bars hit by hard mallets, the vibraphone involved aluminum bars hit with soft mallets.  Each bar has a metal tube below it which allows the sound to resonate, and the slight vibrato effect came from an electric “fan” that modulates the resonator tube openings.

Although the instrument was conceived as a novelty piece for Vaudeville bands, it began to gain popularity as a jazz instrument in the late 1920’s.  There are two or three players whose names are virtually always mentioned whenever a vibraphone (“vibes”) is mentioned and Lionel Hampton would be one of them.  In this record he shows us why.

Hampton’s time in the third chorus is cut short a bit to allow some room for Fletcher Henderson to take a turn on the piano.  Henderson is a legend from the early days of jazz, but much as it pains me to say this, his solo is the lone weak spot on this record. 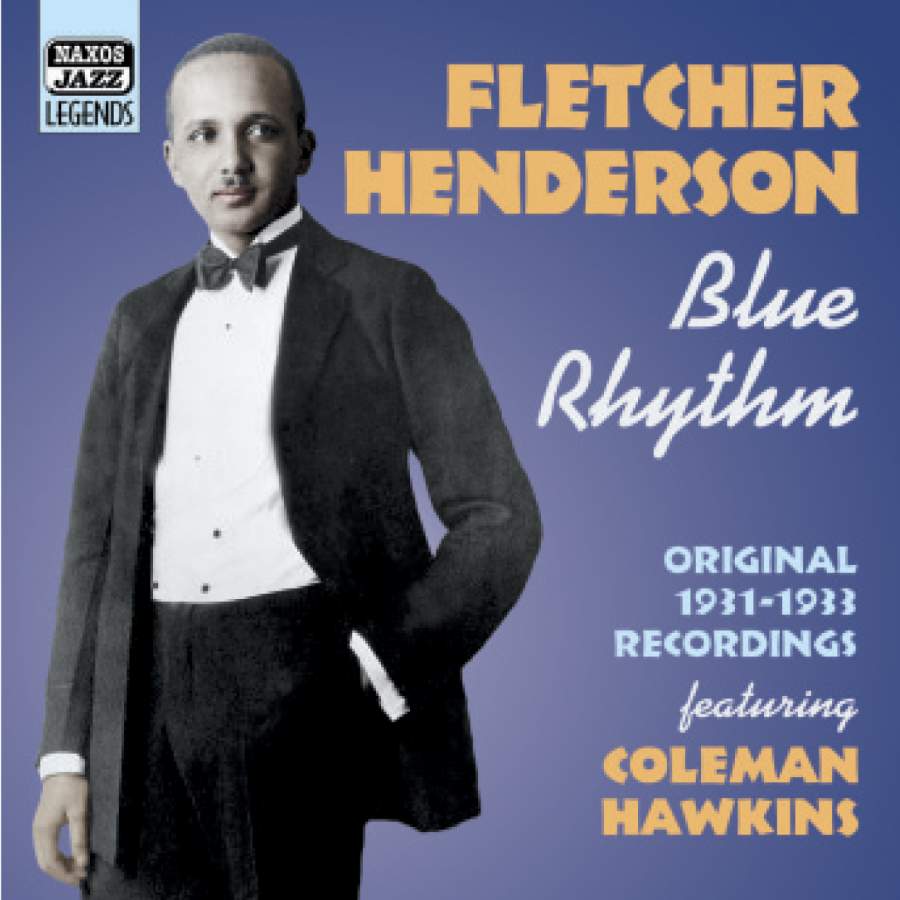 Fletcher Henderson provided most of the early swing arrangements for Benny Goodman at a time when only black bands were playing in that style.  He was a tremendous innovator as jazz transitioned from the 1920s to the 1930s, and made an important and lasting contribution.  But by 1939 swing had moved on.

Henderson, who joined Goodman again in 1939 after yet another disbanding of his own group,  seems to have retained his early 1930’s sensibilities in a sort of “upright” style that fights with the smooth lilt that the rhythm guys laid down.  Fortunately, the solo is a short one and Goodman comes in for the last few phrases to finish things off.

It should give you an idea of the volume of recordings done in those days that this was not released for quite awhile after being cut.  Goodman’s various groups released 28 songs on 14 discs that year and recorded who knows how many more, in addition to a grueling series of live performances both in person and on the radio.  This backlog of recordings turned out to be a good thing once the musicians union banned recording in a 1942 dispute with record companies, because Goodman had a fat stash of things in reserve – including this one, which was finally released on July 17, 1944.  I think you will agree that it still would have sounded fresh and modern then, even though five years old at the time.

Sadly, Charlie Christian did not live to see this one hit the record stores as he died March 2, 1942 at the age of 25.  He had contracted tuberculosis in the late 1930s and his habit of too much hard work and hard living took its toll.  His career was short enough that he never recorded as a leader, but only under the names of others and his work with the Goodman band was by far the bulk of his legacy.

Fletcher Henderson also died relatively young, at the age of 55 in 1952.  His legacy is more tied to his own bands and to his arranging work with Goodman and not so much for his individual piano solos, which would make a record like this more of a footnote in his long career.

Lionel Hampton had a long career as a vibes-playing leader that went almost uninterrupted until a 1991 health crisis.  He did, however, continue playing occasionally until shortly before his 2002 death.  His later years were marked by his assistance with charitable causes and even several times as a delegate to several Republican National Conventions.

In postwar America, the small group would quickly eclipse the big band as the preferred group for jazz performance, and the electric jazz guitar would become popularized by such luminaries as Les Paul, Wes Montgomery and George Benson.  But as with many popular musical trends, Benny Goodman and Charlie Christian got there early.

Many old jazz records are timed about right at the three minute limit of the 78 rpm disc, as there is not time for things to get stale as musicians start to run dry of fresh musical ideas.  This bunch, however, is one for whom I might make an exception.  Charlie Christian and the long play record would probably have gotten along just fine.

In noodling around for other records that featured Charlie Christian I came across “Solo Flight” from March 4, 1941.  I came very close to scrapping this whole effort and starting over with Solo Flight as the featured record.  But then I have written a fair amount about Goodman’s big band records and wanted to shine a light on the small groups.  So let’s consider this a bonus track.

If I had heard this one before I had forgotten about it.  A prewar big band arrangement that features a nearly nonstop solo by an electric guitar is a rare thing indeed, and something I have not been able to stop listening to.  The combination of multiple key changes and Christian’s sparkling guitar work are the stuff from which addictions come.

This was another 1944 release that proved popular at the time.  Unfortunately, because Christian had died two years earlier there would be no more where this came from.

For anyone who is inclined for a deeper dive into this musical version of, well,  Christianity, a discography of his recordings can be found here, in an impressive list for a two year time span.

There have been a handful of artists who had very short careers but who left an indelible mark.  Charlie Christian, who was inducted into the Rock & Roll Hall Of Fame in 1990 for his role as a guitar pioneer (despite never playing a lick of rock), would have to be near the top of this list.

Fletcher Henderson – from an album cover offered for sale at prestomusic.com

Rose Room from the YouTube page of Andreas Misund Berntsen

Solo Flight (First Take) from the YouTube page of the78prof.  This is one of a few channels marking the resurrection of the former MusicProf78 whose channel had been executed by YouTube.  There is also an alternate take of the record out there which is also worth a listen.