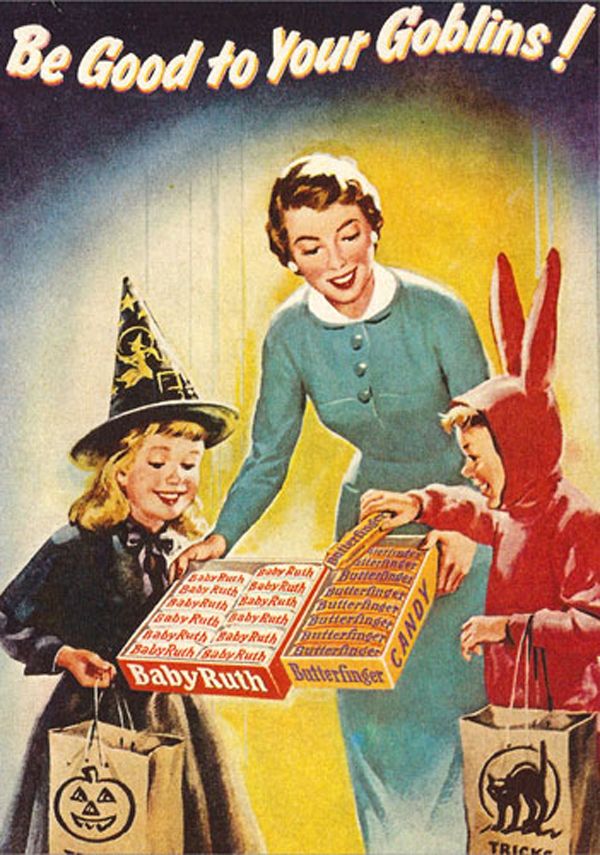 There are so many things that have changed from my own childhood to that of my own kids, so as to be almost unrecognizable.  Today, nobody needs to keep spare change handy in case the need arises to use a pay phone.  Nobody relies on twenty-year-old hardcover encyclopedias to do research for school papers.  And nobody spends their summers by leaving the house in the morning for a day of who knows what and coming home only when being called for dinner.  However, there is one thing that has not changed: the way kids spend Halloween.

As a suburban kid of the mid 1960s, the ritual was to get the costume on, then meet your friends at dusk. In our younger years, a parent or two would accompany us (at a distance) while we ran from house to house ringing doorbells and begging for candy.  Thirty plus years later, the same program played out with my own kids and still continues today.

Of course, preparation had to start well in advance.  The choice of costume would be important.  My mother worked full time and was not much into crafts, so my sister and I often got to pick a “box costume” from one of the variety stores.  It consisted of a thin fabric jumpsuit and a brittle, crinkly plastic mask that was held to our faces with the cheapest elastic or rubber string available – string that usually broke part way through its one-night duty cycle.

But sometimes Mom would rummage through the closets and come up with some decent homemade costumes.  I was a pretty good swashbuckling pirate one year.  The worst was the year I decided to be a fat man.  The plan was to wear my mother’s sweatpants and sweatshirt and to stuff pillows and towels everywhere they would fit.  A plastic bowler hat and a bushy beard finished it off.   Who knew about body shaming in 1967?

I felt pretty good about the result, not least because I could avoid the annual argument over whether I would have to cover a great costume with a coat.  “You are not leaving the house without a coat on – You’ll freeze to death!”   Did any kid ever win that argument?  I know I never did.

But then the trick or treating started.  It was unseasonably warm that year and after about twenty minutes I thought I was going to die of heat stroke from  my masterfully insulated getup.  My flagging energy level was made all the worse by my little sister’s insistence on running at full speed from house to house to maximize her take.

Another thing that was has remained the same is the warnings about adulterated treats.  “Don’t eat any apples, I hear some sick people have started putting razor blades into them” was the advice from my mother.  I said “OK.”  That was in place of what I wanted to say, which was “if you think I’m going to be eating apples when I have a bag full of Clark Bars and Baby Ruths, you’re crazy.”  To this day, I have never seen an apple with a razor blade in it or some other kind of tampering with candy.  I guess urban legends existed long before there was an internet to propagate them.

Then as now, the quality of candy from house to house varied wildly.  The older people who gave out full-size chocolate bars were like celebrities, and we would find ways to plan our route so as to hit those houses twice.  Then there were the people who gave out Smarties or those individually wrapped Life Savers.  The less said about those people, the better.  As an adult, I have been pretty easy to get along with on what kind of candy we buy to give away.  But the time my budget-minded wife reached for the Smarties, I put my foot down.  “We will not be those people“, I pleaded more than insisted.  When she considered that we would likely be eating some of the leftovers, she agreed.

The Post-Trek trading session is likewise a standby.  I believe that many a poker player was made in those high-stakes trades.  Rule No. 1 was to never let your friends or siblings know what you really loved or hated.  Because if you did, you would pay dearly for that king sized $100,000 Bar or the Maple Cream Bun.  Of course, there was no way to unload all of the unwanted Dum Dum suckers and rock-hard pieces of Double Bubble.  Which would turn out to be alright, because we would learn some economics lessons.  Coming to appreciate certain kinds of candy around November 10th that I would never have considered touching on November 1st was all about those pesky laws of supply and demand.  Who knew?

I will confess to one thing that did change from my own trick or treating career to that of my kids, and this was the institution of the Dad Tax.  As a guy whose college major was Economics, I recognized that a little early exposure to the “real world” would be good for them.  “Hey, this stuff you guys enjoy around here isn’t free, you know.  So what kind of candy have you got for me?”

Before you judge me too harshly, think of this as “taxing the rich” – I never came around and demanded candy when they had none, but only when they were loaded, and I never tried to take their favorites.  But boy did I hate it when the choices would dwindle and I would get paid in Smarties.  But as I think about it, my own Mom would also occasionally come around looking for a piece of the candy action.  She did not explicitly call it a tax, but we knew that greasing Mom’s palm with a Milky Way or a Mr. Goodbar was just good business.

One other thing that has changed is the prevalence of peanut allergies.  Which I did not think about when I grabbed the two bags of Pay Day bars that were on sale early in the month.  In my defense, I sort of expected that they might be gone before Halloween and that we would buy something else to give out .  What, that’s never happened at your house?  But by some heroic efforts at self control, those bags remain unopened.  It appears that a few kids with peanut allergies may draw a bad poker hand in the candy trading when they ring my doorbell.  I suppose I should be a good citizen and buy something else to hand out.  But no Smarties.

6 thoughts on “The Ritual”