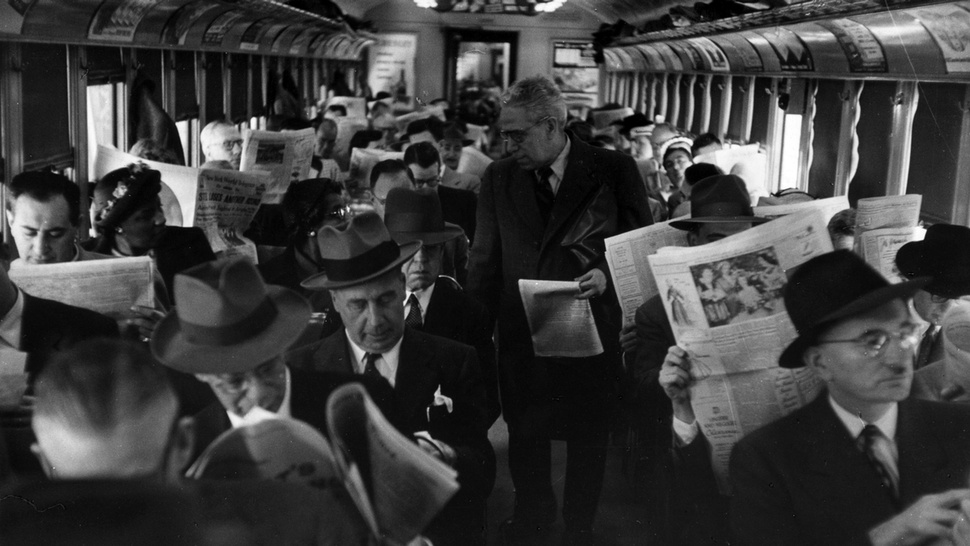 What is black and white and read all over?  This was a popular riddle when I was young.  And of course, any of you over, say, 40 will immediately know that the answer is – a newspaper.  For those under 40, a newspaper is that curious anachronism that many of your grandparents and a few of your parents still read.  I am here to confess to the world that I am among those who revel in the old-fashioned practice of reading a paper pretty much daily.  Why I continue to do so is a bit of a mystery to me.

Newspapers.  They are dying, losing subscribers and advertisers at an alarming rate.  They are expensive and getting more so, while the number of pages keeps shrinking, in both size and number.  Then there is the problem of accumulation, with the need to drive them to a recycling bin as the stack of old news piles up.  So why can’t I give them up?

My Mother has subscribed to a newspaper for my entire life, and she still does.  I started reading the Fort Wayne Journal-Gazette as an adolescent.  The comics were a start, but I soon moved on to the news sections, getting a deeper dive into the stories covered briefly on television.

And then there were the classified ads.  From my youth, I was enthralled with cars, and the daily classified ads were an escape into a world of wheels that would allow me to kick tires and slam doors to the limits of my imagination.  The ’61 Chevy for $75 was probably a real dog, but the low mile ’63 Chrysler New Yorker for $650 was undoubtedly a genuine little-old-lady-driven creampuff.

As I headed off to college, Mom knew how much I liked the paper and bought me a gift subscription.  The one problem was that the Fort Wayne paper didn’t arrive in Muncie until the next day –  unless a weekend intervened.  News stories proved to be much like fresh food, with some kinds being good the next day or three, while other varieties quickly became stale.

About that time, I discovered that the Wall Street Journal was offering a student rate that brought that august paper into my budget.  I was an economics major and the Journal’s editorial pages had become a major forum for the passionate debates going on in that field in the late 1970s.  Many well known economists from varying schools of thought were regularly found in the paper’s Opinion section, and I read them all.

When I had moved on to law school, one of my roommates was a fellow newspaper lover and we split the cost of an Indianapolis Star subscription, in addition to the WSJ subscription that I simply could not do without.  The Star was so much thicker than the Fort Wayne paper that I had been used to.  I guess this was what you got when moving to the big city.

I actually get a third paper, a small weekly sheet called the Criterion, that is published by my Archdiocese.  There is not a lot of substance there, but I read it just the same, every week without fail.

Thirtysome years later, I still get a Star delivered daily to my house and the Journal delivered daily to my office, and I still read them both.  The Star gives me local coverage and a light-duty take on national stories, while the Journal fills in with superior national coverage and some wonderful in depth feature writing that feeds my need for ever more knowledge of the human condition.  And, of course, an editorial page that remains one of the few bastions of what I will call thoughtful conservatism (as opposed to the flavor that has been getting so many primary votes this year.)  But more and more, I am finding myself with less and less company.  Most people I know these days get their printed news online, usually without a subscription.

I can understand why, especially with what the Indianapolis Star has become.  In size, it shows up on my driveway with about the same heft and substance of the Muncie Star-Press of my college days, a newspaper that I never bothered to seek out because it seemed so small and inconsequential.  The Star has given up covering national stories, incorporating the news section of USA Today instead.  Luxuriating over the morning newspaper takes a lot less time (and coffee) than it used to.

And every once in awhile, the Star makes me wonder how much longer I can remain among their active subscribers.  Not only has the paper’s editorial outlook shifted fairly dramatically in recent years, but there seems to be more and more of an underlying worldview that is a bit different from mine.  I suppose that is the natural consequence of modern newsrooms having all of the intellectual and political diversity that university faculties have become so famous for.  It is, of course, difficult for anyone to completely divorce one’s writing or choice of subjects from one’s underlying assumptions and biases (This piece you are reading can serve as Exhibit A), and newspaper reporters and editors are no different.

As an example, in the last few days, the Star’s USA Today national news section contained a lengthy lead article on Donald Trump’s refusal to release his tax returns.  The cynic in me thinks that this might have been quite a relevant topic when there were several qualified candidates running against him in the primaries.  But when the Republican candidate with the highest polling negatives on record has clinched the nomination and is ready to face the Democratic candidate with the second-highest polling negatives, out comes the tax return story.  I suspect that in the coming months we will see quite a few more examples of a freshly energized press doing the job it should have done months ago.  But I digress.  In any event, I believe that it is good for any of us to read a variety of views, which is one of the reasons I keep the Star coming.

Another dissatisfaction I have with my local paper is that its ability to cover local stories isn’t what it used to be either.  I read a newspaper because I am looking for some depth and perspective as opposed to the quick surface-skim so common in broadcast news.  The newsroom’s ever-contracting (and less experienced) staffing doesn’t always do local stories the justice they deserve.  And the classifieds?  Between cars, trucks and SUVs, I recently counted a whopping ten private-party vehicles for sale.  This in a metropolitan area that approaches two million souls.  Yet after all of the kvetching and griping, I continue to subscribe and read.

The Journal has maintained a better record, though I was a bit nervous when it’s ownership changed hands a few years ago and again when it lost the classic six-column format that dated back to the golden era of printed news.  Their Saturday edition has become a favorite, full of book reviews, feature articles and essays on all manner of topics that have nothing to do with the world of high finance.  I do wish that they would go back to the honest-to-goodness full classic newspaper size, but I guess I must make some concessions to the twenty first century, and it is still printed on larger sheets than the Star.

I have occasionally tried digital versions, usually when there has been a delivery problem.  I have a nice tablet which allows me to sit in the same chair with the same coffee cup at my side while gazing at the pixels that bring me the same morning’s need-to-know stuff that I usually get on newsprint.  But it just isn’t the same.  Is it that my eyes can scan a page of newsprint faster?  Or is it the tactile sensation of those big, soft-yet-crinkly sheets of paper?  Perhaps my connection to this ancient medium is purely emotional, one of the few ties remaining to a much enjoyed activity of my youth.  I have no idea.  But every time someone says “I haven’t subscribed for years, I just read it online” my heart does this little beat skipping thing, like when someone says “I just used the last of the coffee, can you do without today?”  No, I absolutely cannot.

And do you know what?  I am not troubled by this lingering connection one little bit.  Because twice a day I get to experience a burst of anticipation that makes me nearly giddy as I sit down and open a fresh newspaper, wondering what fascinating things there will be for me to see today.  The days of pieces being written, printed on paper, folded and delivered to my home or office will not be here forever.  But they are here for now, and I intend to appreciate and enjoy every last one of them.

6 thoughts on “Black And White And Read All Over”