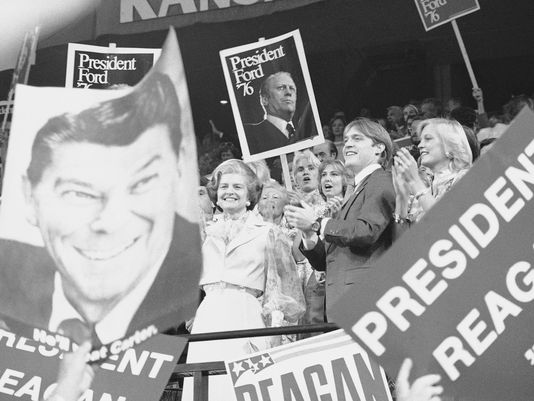 It has been a tumultuous political season.  The inevitable Democratic candidate has been getting a run for her money from a septuagenarian socialist, while the (first) inevitable Republican got drummed out of the race months ago.

I was having a political conversation with my middle son, who is on the verge of being graduated from college and entering real life.  Part of our discussion centered around Bernie Sanders’ popularity within my son’s general demographic of educated millennials.  Sanders’ vigorous challenge to an entrenched political heavyweight made me think back to the last genuinely contested convention that we had – for the Republican nomination in 1976.

I grew up in Allen County, Indiana.  You would be hard pressed to find a more Republican-dominated region, and this was probably even more true in the 1970s.  Politics interested me as a youth, and the period from 1972 to 1975 had provided plenty of politics to be interested in.  A Nixon landslide, the constant barrage of coverage of the Watergate scandal and Nixon’s 1974 resignation, which ushered in the country’s very first un-elected President in Gerald R. Ford.

I was still a couple of years away from voting age in 1976, but something about Ronald Reagan captured my imagination.  Reagan had become unhappy with the direction of the Republican Party and sought to challenge Gerald Ford for the right to run in 1976.  Challenging a sitting president was a bold move then, and made for a lot of spirited discussion in my little part of the country.  Frankly, this was the first time that I experienced a major political disagreement between people who usually didn’t disagree.

My youthful enthusiasm was encouraged by my best friend Dan and his father, as well as by my barber, both of whom were rock-ribbed conservatives.  My parents were not so enthusiastic.  My mother was firmly in the Ford camp, while my father, though intrigued, was not convinced that  Reagan had the chops for the Oval Office.  But every teen is convinced that his parents don’t know everything, and so a Reagan man I was.

I forget how I actually did it, but I somehow volunteered for his campaign in the early spring of 1976.  Reagan seemed to be on a roll and it was exciting to be part of something that looked a lot like destiny to my young eyes.  A couple of friends and I helped put out signs and pass out campaign material.  It felt important having a small role in what felt like a movement.  That I got an excused absence from school on election day didn’t hurt, of course, and I spent the day at two different polling sites passing out those last-minute-let-me-change-your-mind fliers to people walking into the building to vote.

I will confess that I was not above a little mischief.  An upperclassman at my high school had been a very vocal Democrat and never missed an opportunity to hurl multiple insults at Reagan (and at me for supporting him).  When I saw him approaching me at a polling site, he dished out more of the same.  I took more than a little satisfaction from watching him drive out of the parking lot with the Reagan bumper sticker that somehow found its way onto his car.

After the 6 pm closing time for voting, we campaign volunteers were driven downtown to a fancy dining room in one of the big downtown office buildings, where I felt like an adult as I mingled with local Republican movers and shakers.  My most vivid memory was being introduced to a young lawyer whom I was told was going to make a big splash in politics.  His name was Dan Quayle, and I still have the campaign button that i was given for his first run for office that year.

I spent the rest of the spring and early summer following the ups and downs of Reagan’s campaign like some others followed their favorite baseball team.  Like my beloved Chicago Cubs over so many seasons, Reagan’s momentum started to slow as spring turned to summer.  His unusual announcement of a running mate in which he selected Richard Schweiker, a moderate-to-liberal Republican senator from Pennsylvania, was made with a lot of fanfare, but didn’t do much to turn things around.  Sort of like a similar move by Ted Cruz this year.

My final memory of that campaign season was staying up late watching the Republican convention on television.  All of those in the know thought that the race was over, but idealistic young me held out hope for an upset as the delegates announced their votes.  The alphabetical order favored Reagan early, but those in the know turned out to be right.  Reagan lost, Ford won.  And then lost.

That turned out to be my single foray into organized politics.  Thinking back, I am not sure why.  Well, I’m sure why I dropped out before November of 1976, as I had zero enthusiasm for Ford and there were other things more worthy of my time.  Even so, my man was running again in 1980.  I was a college student majoring in economics (as Reagan himself had done early in the Great Depression) and I should have been all over another local campaign.  But for some reason I held back, limiting my political engagement to the armchair and the voting booth, as I still do today.

I guess the point of all this (to the extent that there is one) is that while I may not agree with them on a lot of things, I understand and respect the passion and the excitement that so many young people are experiencing by supporting and working for the underdog Sanders campaign this year.   They may suffer the same crushing disappointment that I experienced in 1976, but they will also have accomplished something in helping to make the establishment pay attention to their man.

So anyhow, maybe things will shake out so that both party conventions this summer are yawnfests which will be nothing more than a chance for politicians to contribute to the excess of greenhouse gasses.  Or maybe we will get another real contest (or two?) where things are genuinely in doubt right up to the final votes.  Personally, I’m pulling for a couple of old-school slug-it-out conventions to get us lined up for November.  Those enthusiastic young volunteers for all of the candidates have earned them.

3 thoughts on “A Contested Convention”