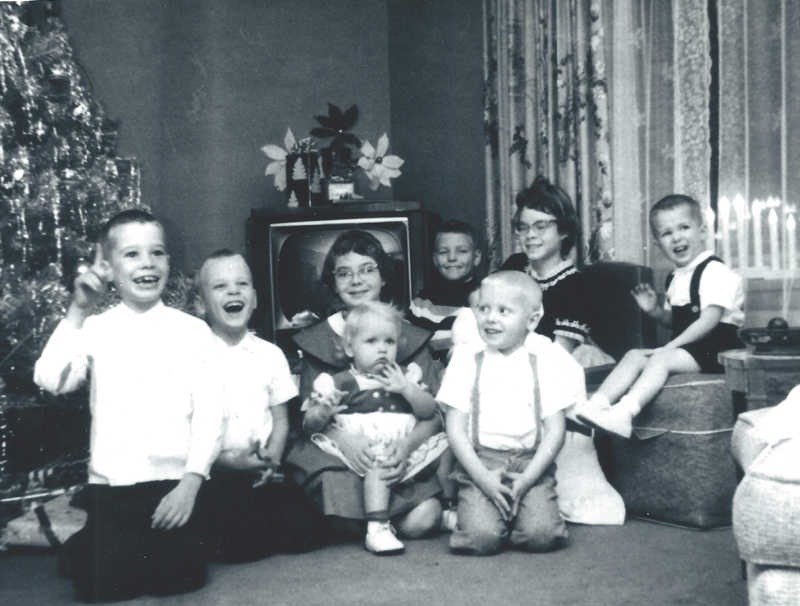 I spent last weekend making an eleven hundred mile round trip for a funeral.  It was a long weekend, but one that plunked me back into the middle of the extended family that I spent so much time around when I was growing up.  And it was a place I needed to be.

The weekend was two things for me.  First, it was sad.  My Aunt Dean was always the one at the center of everything whenever the family got together.  Her personality and her laughter never failed to fill whatever house we might have been at, so with her gone, things were uncomfortably subdued.

Beyond the sadness, however, was the sense that it was good and even necessary to be back together again as we had been so often when we were all young.

During the years I was growing up, my mother’s family was close.  Even though we never lived closer than forty five minutes from any of them (and often much farther away than that), we saw each other fairly frequently.  My mother and her two sisters (one older, one younger) grew up on a farm during the years spanning the Great Depression and the second world war.  They were a tight-knit family and remained so as long as the sisters were  living.

My mother loved to recall and pass on the stories of her family.  And when she got together with my aunts, the stories always came faster.  Perhaps this is where I developed my love for a good story, because I heard so many of them.  Even though my grandfather died before I was born, I got to know him through the stories.  And while we saw the cousins only every month or two in the early years and much less frequently later, the stories of their lives brought us closer.

My mother is now the only one of the three left, and in diminishing health.  Still, she was strong enough to make the drive with me.  I wondered how such a long trip would go, but should not have.  Mom was in a reflective mood and soon settled into a comfortable flow of the old stories I had heard so many times before.

There was a time when I would have rolled my eyes and responded with “Mom, you have told this a hundred times.  Can’t we please talk about something else?”  But I was in a reflective mood too, and let those old stories wash over me like a well-worn, comfortable  blanket.  I was reminded of her grandmother Nora’s tart personality that melted into a schoolgirl’s giggle when my Mom took her to the drugstore for her first ice cream soda.  And the way Albert, her father and a staunch Republican farmer from Ohio, would every so often throw a fit about the Democratic morning newspaper from Fort Wayne and would cancel his subscription, only to relent a few weeks later because he simply could not embrace a newspaper that came in the late afternoon, no matter how agreeable its editorial position might be.

She remembered being in nurse’s training in Fort Wayne and having regular privileges to borrow one of the Cadillacs owned by her uncle the physician whenever she wanted to drive back to the farm to visit her family, and how embarrassed she was when she needed gas and had to tell the attendant at the station to put a dollar’s worth in because that was all the money she had with her.  And how after nursing school, she and three friends rented an apartment above a dry cleaning shop and had to listen to the noise from the cleaners while trying to sleep after working a night shift.

It eventually occurred to me that I have not done nearly as good of a job in maintaining the kinds of family ties I enjoyed growing up, nor of passing these and other stories down to my own kids.  They might not really care that my cousin Dave got a young me to put my tongue on a nine volt battery by convincing me that it tasted like cherries.  (It did not, actually.)  Or how my cousin John (who was Johnny then) took my sister and I to a movie theater in his small town that still had a couple of old ladies with flashlights walking up and down the aisles to shush unruly kids.  But that story and many others would allow them to get to know people that they have only met a few times in their lives and a world that they have never known at all.

If our lives are woven from many different threads into a single cloth, I like to think of family stories as giving that cloth added depth and strength.  In my own family, the strength of that cloth was evident in the way that all who were able came together again over some long distances when it became necessary.  I don’t imagine that any of us thought about how old family stories brought us all together, but in a way they really did.  They made us closer and kept us closer than so many other families have been, though perhaps not as close as we might like.  So next time I feel a story coming on when my kids are around, I think I’ll tell it.  I might bore them.  But then again, I might be doing something really important.