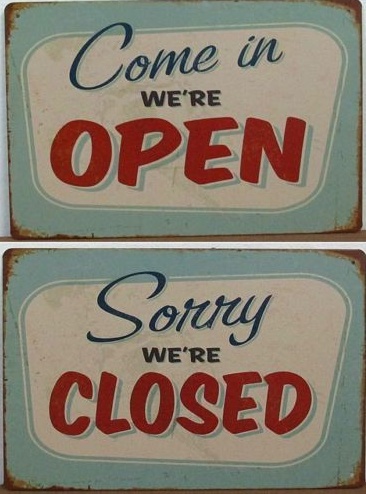 Many of us have spent the last month or so in lockdown mode.  There is a virus on the loose and we have all gone to our rooms in an effort to promote social distancing, flattening the curve, and whatever other overused term you may be tired of hearing.

But what comes next?

A great debate rages at the moment over whether we should begin to reopen or whether the current quasi-quarantine should continue.  I have no interest in advocating here, and no interest in getting sucked into the Great Left-Right Political Vortex.  I have, however, listened to and read different viewpoints on this question.  Here are some thoughts and/or questions that have been underappreciated, in my view.

As I recall things, we were told that the activity restrictions that were put in place almost everywhere were necessary for three main reasons (in no particular order): To minimize spread by person-to-person contact, to buy time for the medical community to get a handle on treatments or possibly a vaccine, and to “flatten the curve” so that not everyone gets infected at once, thus overwhelming hospitals’ ability to care for the sickest patients.  Did anyone believe that this was ever going to be an actual solution as opposed to a way to buy a little time?

There is an old political saying about whether something is a real problem: it depends on whose ox is being gored.  Here is the hard fact – some people who contract COVID-19 from this virus are going to die from it.  The number is small (at least relative to the population as a whole), and the high-risk pool is reasonably identifiable, but deaths there will be.  If anyone tries to tell you that they know by how such deaths will increase, be skeptical.  Be assured, however, that the number of deaths is significant now and will surely increase if stay-at-home orders are lifted.

And let us not soft-pedal the serious of a COVID-19 infection.  While the death rate is a low percentage of the population, this rarity doesn’t really matter if you or I are among those who get it.  And those who get it can be in for a nasty time.  Early on I wondered if it would be better to get exposed early, get sick and get over it.  We have more experience with the disease now and that is no longer my opinion.  Illness and death are wrenching things among family and friends and there has already been too much of it.

Here, however, is the other hard fact – with many of us hunkered in our bunkers, the economy is in freefall.  Actually, never mind this talk about this amorphous, conceptual thing called “the economy”.  What is in freefall are the situations of those who have the least to lose.  The restaurant and entertainment industries have largely shuttered.  The dishwasher in the steakhouse kitchen or the server at Denny’s are not working.  Yes, there are unemployment benefits, and yes they have been temporarily bumped up.  But the normal unemployment payment in my state tops out at $390 a week.  Many readers have savings and investments to fall back on, but I have read estimates that 30% of Americans are 1 month from being broke and that over 40% could not hold out beyond 3 months.

It occurs to me that those most aghast at the idea of some kind of re-opening are those in upper income fields who can either work from home, or whose jobs are essential and are not at risk of layoff.  The epidemiologists whose heads appear on television are mostly over sixty and are, on average, more at risk from death should they become infected than they are for losing their homes because their employer closes (whether temporarily or for good).

So which group are you in – the upper-middle-class people still employed, with homes mostly paid down, and/or with (recently depleated) IRAs and a lifetime of savings so see you to retirement?  Or are you 29 years old who has lost a decent job and is in danger of being evicted from your apartment because you can’t pay rent and having your used car repossessed because you can’t make the payment that seemed so reasonable a year ago? Put bluntly, are you one of the ones more likely to catch it and die or are you one of the ones on the verge of losing what little you have?

This choice, to re-open or to remain clamped down, is not a simple 1:1 tradeoff, either.  People have been dying while we are on lockdown, and many businesses are toast even if we re-open.  Who plans to take in a convention this summer?  My city does a lot of convention business, so those hotel and restaurant workers are in trouble no matter what happens.

The fact is that there is a lot more that we do not know right now than what we do know.  The scientific and medical communities do not yet have a handle on this virus.  The business community does not yet know how much activity will return if shut-down orders are relaxed.  Nobody knows what “normal” is going to look like in the next several months no matter what we do.  This experience is going to have to be lived one doctor, one patient, one company, one worker, one family at a time.

Me personally?  I am fine if a lockdown stays in force for awhile.  But here is the disclosure: I am old enough to be more at risk from infection than average and I am still earning the same income while working from home in a legal field that is reasonably well insulated from the ups and downs of the economy.  But as I learned a long time ago, not everyone else is like me.

The only takeaway is that this is one of those times when there are no good options.  Bad things are going to happen to good people no matter what set of rules our various levels of government choose to enforce.  There are hard choices to be made and those who make them will be criticized from multiple sides.  Because there are reasons for either course.

There is only one thing that I am absolutely sure of: When it comes to deciding whether to be open or closed, I am happy that I am not the one with that heavy responsibility.