It all started with a ruler and a pen.  My legal career, that is.  C’mon, you know you want to read more.

My first job in the legal field came late in the spring of my second year of law school.  It was a time when all of us were looking to be hired as “law clerks”.  A law clerk, as I later learned, was basically working as a paid intern.  A gofer (go fer this, go fer that) in a suit.  Yes, this was in the first half of the 80’s when we all had to wear suits, even those of us who lacked (as yet) law degrees.

I went to work at a firm that did mostly “insurance defense”.  This was a booming field then, one where we were the lawyers hired by insurance companies to represent the drivers and homeowners who got sued for allegedly causing accidents. Had I gone to work for a firm that represented the people hurt in those accidents, I would have left the “allegedly” out of that sentence.  It’s all about perspective.

The senior partner there was a man in his late sixties who was beginning to wind down from a long and successful career in the field.  From the 1950’s through the 1970’s, he was one of the guys you wanted on your team if you were an insurance claims manager who hoped to keep the hotshot personal injury lawyers at bay.

Wendell was a very conservative man, and I don’t mean just politically.  He was the kind of guy who had no use for many modern lifestyle innovations.  He was a man of deep Christian faith and a man from a simple, rural background, strained through the sieve of the Second World War where he served his country by jumping out of airplanes behind enemy lines.  Wendell was not afraid of anyone or anything, and was as fine a man as an aspiring lawyer could choose for a mentor.

My very first day in the office began with an assignment from Wendell.  “I have a trial coming up.  It involves an insurance policy and I would like to give each juror a copy of the policy, and I would like you to underline some parts of it.”

“I’m going to law school to underline?” was my first thought.  An unspoken first thought, of course.  Wendell continued: “I want you to use this pen, it has a good tip on it.  And here is a ruler.  Let me show you how I want this.”  I watched Wendell meticulously place the wooden ruler below a line of text, and then slowly and carefully make a perfectly even and straight line across the page.  There were two or three sentences that needed this treatment, and after Wendell got through he told me that he needed six more done just like it.  “Do you think you can do that?”

I knew what he meant.  He surely knew that I could make underlines.  He wanted to be sure that my underlines would look exactly like his underlines – straight and even and perfect, with no ink globs or waviness that might happen if I were not paying 100% attention to this simple task.

I set to work and meticulously underlined the text on six different insurance policies.  I was pretty sure that it was impossible to tell mine from his, as I mimicked as closely as I could how far out from the beginning and end of each line of text his underlines had gone, and the thickness of each line.  It was a simple job, but not an easy job.  Wendell was  satisfied.

There was another time when he was not satisfied, and he came in to see me.  “I wanted to show you something about the way you staple” he said.  “What?  How can there possibly be something wrong with how two papers were stapled together?” I asked myself. 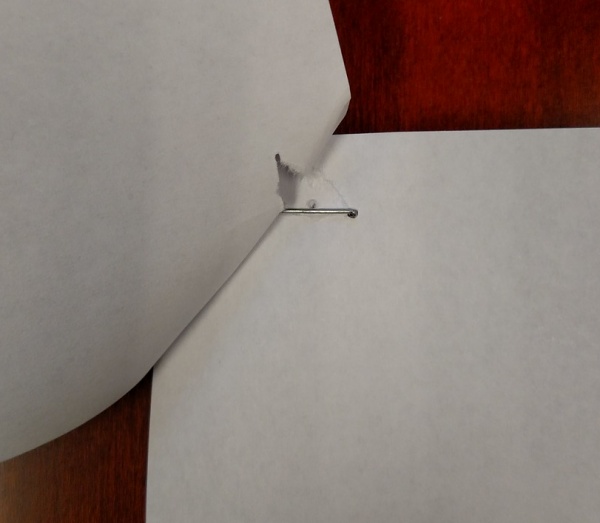 “See how you did this?” Wendell asked.  “Your staple goes straight across the top of the paper.  The problem is that when you turn to the second page, the top sheet pulls at the sharp end of the staple and it wants to tear.  If your staples go like this, at a 45 degree angle to the corner of the page, the paper won’t tear when you turn the page,  See how the paper bends right along the side of the staple?” 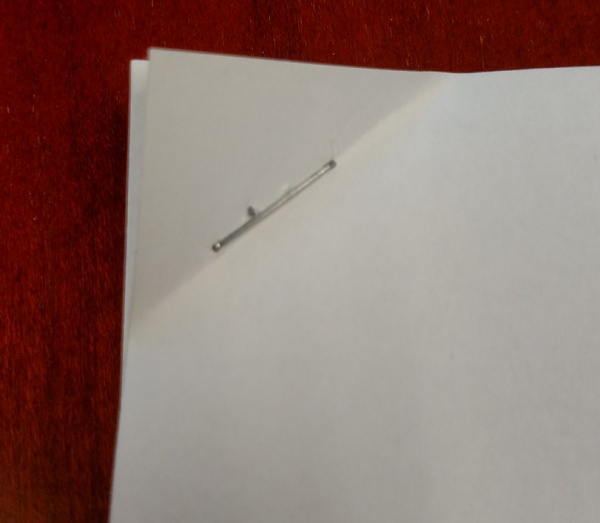 What I actually said was “OK.”  It took a little bit, but I kept simmering over what he said and how he said it.  He was not being intentionally condescending, he just knew what he wanted.  The problem was that he was right.  I hated that the most of all.  I stapled a few things a few different ways, even.  And I had to admit that he had a point – his way really was better.  Stapling papers was a simple thing, but not necessarily an easy thing and Wendell insisted that it be done in the best way possible.

The passing decades have found me well along in my career.  And there have been many times when the temptation has been great to take the shortcuts.  And in times of hectic workloads or deadlines that must be met, or especially when it involves an internal process that doesn’t affect a client’s case, I have taken them.  But every time I have done so, I have thought to myself that “Wendell would have never done it like this.”  And as often as not the shortcut taken would eventually cause problems somewhere else, so that the time and effort initially saved is spent anyway.  Leading me to sigh “Wendell would never have had to go back and deal with this.”

I will never get to practice law with the luxury of the unhurried pace that was the norm in  Wendell’s day.  Times have changed and we are pressed to accomplish so much more (and in less time) than was the case “in the old days.”  But as I reflect, I can see that my best moments as a lawyer can be traced back to heeding the lessons learned from well-drawn straight lines and forty-five degree staples.  The simple things are not always easy.  Done well, they almost always require care and thought and effort.

All other photos by the author

24 thoughts on “The Basics Done Well”