I don’t mean to be such a downer.  A few weeks ago I wrote about reading the obituaries in my local paper, and now I have a piece about graves.  Well this one actually has a little news value, so stick with me here.  Oh yes, it involves John Dillinger.

A grave site in my city has been all over the news lately.  A group (which until the last couple of weeks included The History Channel)  wants to dig up the body of John Dillinger, the 1930’s gangster who died in a hail of gunfire outside Chicago’s Biograph Theater in 1934.  I always wanted to find a context to use that phrase – died in a hail of gunfire.

There have been, it seems, longstanding rumors that Dillinger was not the guy shot down by FBI agents that night and buried in a family plot in Indianapolis some time later.

Where he might have gone, well, nobody really says.  Perhaps he is sharing a condo somewhere with Hitler and Elvis?  I suppose that we live in the age of the conspiracy theory.  The moon landing was faked, 9/11 didn’t really happen and John Dillinger lived out the rest of his natural life in obscurity somewhere.  Probably working security at a bank.  Sigh. 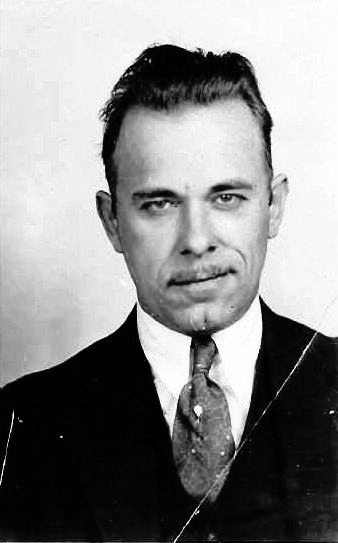 John Dillinger was born in Indianapolis and showed promise as a baseball player at one time. His family moved to a small town in a nearby county because is father thought the city was corrupting him.  Whereupon young John stole a car.  He later joined with Ed Singleton, an ex-con who umpired for the semi-pro team for which Dillinger played shortstop.  They planned a robbery that went bad and Dillinger did 9 1/2 years in the pen.

He got out in May of 1933 and after fourteen violent months he was (allegedly?) killed in a gunfight with the FBI.  After his short but violent life he was buried here by his family.  As an aside, fear of grave robbers caused the family to pour a thick pad of concrete over the casket.  Which is going to cause a mess if those behind the project can overcome the cemetery’s objections to the exhumation project.  Which are that it will bother the neighbors, apparently.

It occurs to me that there are quite a few other mildly famous people buried in Indianapolis. Not being a “grave sleuth” (is that a thing?) I have not tried to search them out.

OK, I just did (and I guess it is a thing) – at least those in the biggest cemetery in the area – and we can lay claim to the graves of former president Benjamin Harrison, poet James Whitcomb Riley (author of Little Orphan Annie) and Richard Jordan Gattling, the inventor of the Gattling gun.

I have, however, personally come across another that I found interesting.  This grave (or a group of them) contains the remains of some guys who were famous for doing something good rather than for doing something bad.  I refer to the Chevrolet brothers.

Everyone knows their name too.  Born in Switzerland, the brothers Louis, Gaston and Arthur got involved on the ground floor of automobile racing in America.

Their racing efforts gained the attention of William Durant, who joined Louis in creating the Chevrolet Motor Company in 1911.  Unfortunately, their involvement with that most famous company came to an end in 1916 over their stubborn refusal to consider designing inexpensive cars.  That refusal undoubtedly cost them a literal fortune when, within a few years, the Chevrolet company became the backbone of General Motors.

The Chevrolet brothers. From Left: Louis, Gaston and Arthur

The brothers continued to make their mark in racing.  Chevrolet-designed cars made up one third of the racers running in the 1920 Indianapolis 500. One of them was the winner, with Gaston Chevrolet at the wheel.  One of their cars won the next year too.   They also designed speed parts for the Ford Model T and became pretty successful even without a General Motors connection.

Sadly, the brothers lives all ended in varying degrees of tragedy.  Gaston died on a race track in Beverly Hills, CA in 1920.  Louis and Arthur lost all of their money in the 1929 stock market crash, which forced Louis to take a job as an assembly line worker at a Chevrolet plant where he worked until he died broke in 1941.  Arthur, sadly, took his own life in 1946 after a career as an engineer and mechanic.

So while John Dillinger’s grave gets all of the notoriety in the fancy cemetery on Indianapolis’ tony old north side, the Chevrolet brothers’ graves sit in relative obscurity in the old Catholic cemetery on the city’s industrial south side.

John Dillinger mugshot – via Wikimedia Commons, from the files of the FBI

Photo of Louis Chevrolet in 1914 – In the public domain, via Wikimedia Commons

June 19, 1920 photo of Gaston Chevrolet – in the public domain via Wikimedia Common