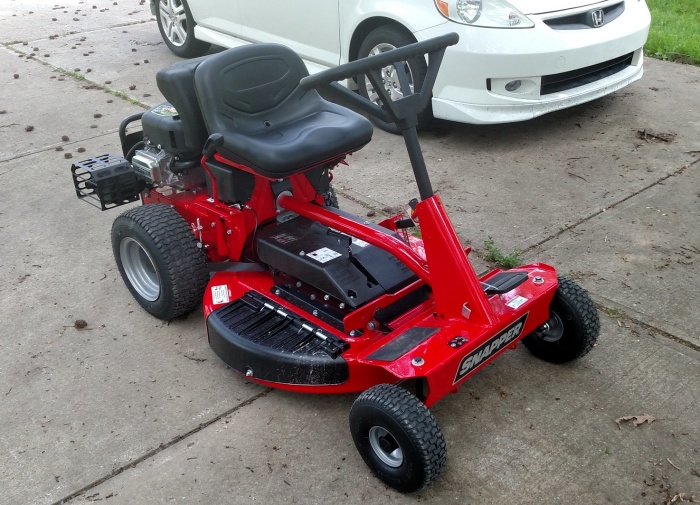 A few weeks ago I shared my “German Farmer Problem”.  You can read the whole thing here.  In a nutshell it is the belief that every possession I own will be good forever – absent some sort of natural catastrophe.

The problem manifested itself after my twenty year old lawnmower (which I bought used fifteen years ago) became an environmental hazard due to oil incontinence issues.  How bad?  How about “I may as well just pour three quarts of oil in my yard while I cut it” bad.

I have received some offline inquiries into how I solved my problem.  OK, I received one inquiry (you know who you are) and I decided that an update was warranted.

I. Bought. A. New Riding. Mower.  Gad, that is still hard for me to say.  But I cannot decide if the German Farmer got the better of me again, or if I vanquished him by doing so.

First the grass cutting guy issue kind of resolved itself for me.  He notified me that he had taken a full time job but that he could still handle some customers after hours.  Unfortunately he seemed to have over-committed, as his “after hours” seemed to mean “after all of the hours contained in May and June”.

I started looking at used equipment, as any good German Farmer would counsel me to do.  But I learned a lesson – pretty much all good used riding mowers are being used by their owners during the summer months.  It is only the ones that need “just a thing or two” that are for sale, at least at a reasonable price.

I liked the size of the classic Snapper that an elderly neighbor used to own.  I found one owned by a guy who had stopped mowing for health reasons.  The German Farmer in me was willing to overlook the fact that it needed an adjustment in the drive mechanism.  The guy would include the tool for making the adjustment.  I was also willing to overlook the fact that it was built in 1973.  Because a quality mower will last forever (quoth the German Farmer in my mind}.

My Mrs. gave me one of those sideways looks and gave me her opinion.  “Why don’t you quit looking at junk and just buy a new one?”  I had to admit that she had a point.  I didn’t really need a project – I already owned a project that I was unwilling to tackle.  And it was during my final 3-quart-of-oil-mowing that-I was forced to admit something: that I was unwilling to commit the time and resources necessary for maintaining a classic lawnmower collection.  What I really needed was a tool that was going to work when I needed it and without any backtalk.

I did like the fact that the brand new Snapper was the same basic design that had been in production for decades and that it seemed a perfect size for my modest homestead.  And if a Snapper from 1973 was still running then a new one should be good for the rest of our lives.  It was this last part that tickled the German Farmer.   Buy a good one and it will last forever.  Everybody knows that.  And so I did.

I agonized over the cost.  Understand that I have bought perfectly serviceable cars for less money, though that probably says less about the cost of the mower than the age and mileage of some of the cars I have bought.  It is also no longer possible to get one of these without an electric start.  Fortunately I was not also forced to get an air conditioned cab or power steering.  And I suppose that good old fashioned durability comes at a cost.

The only issue this left was my need to get my weed whacker started for the first time since . . . uhm, I’m not sure.  But the good news was that all the parts to make it run were $6.58 on Amazon.  The German Farmer was proud when it finally fired up after I replaced the decayed fuel lines and primer bulb.  But then the other end started giving me trouble when the plastic cutting line kept getting bound up.  I thought I could fix that too until the big spring inside of the unit simply disappeared during one of the thirty disassembly operations.  So a new one of those was procured as well.  Oh well, at least the big metal tube in the middle was fine.

So here I am, all set for the rest of my life in terms of lawn care.  Yessiree, self-sufficiency is the rule here at J P Manor.  And it is true – driving makes everything more fun (or at least tolerable).  So I either went full-on German Farmer or wrestled him to a draw.  Either way, I think the German Farmer is pleased.  As am I.