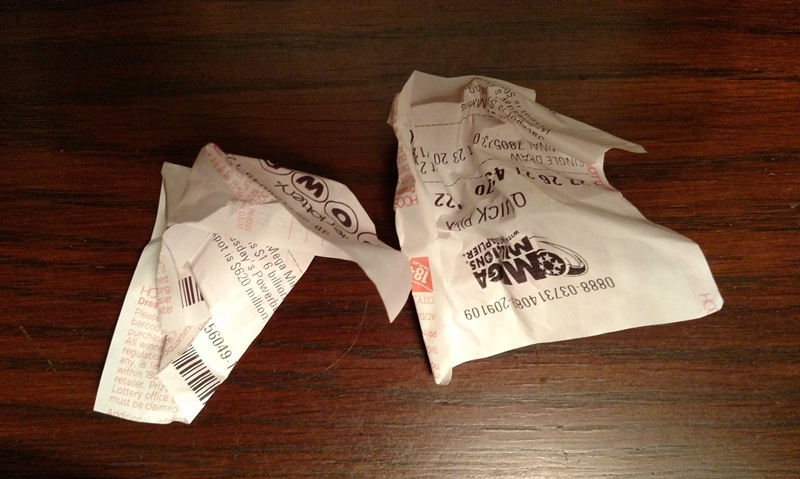 “This Is Your Lucky Day” was the bit of wisdom which greeted me when I opened my fortune cookie following a Chinese meal.  “Well isn’t this good news” was my first thought.  So how was my lucky day?

It had not actually seemed like my lucky day when I bought the carry-out dinner.  The wind had been blowing extremely hard and our electricity had flickered a couple of times.  Flickering lights followed by a loud “boom” from an exploding transformer usually mean that there are going to be some issues with our electricity.  Fortunately,  things held and the electrons continued to march into our circuit box.

Because we had some travel plans for Sunday morning I went to church on Saturday evening.  Mrs. JPC was not feeling well and stayed home – something unusual for her.  A little wind would not be a big deal.

I came out of church to find limbs on the ground all around my vehicle.  On the drive towards my house there were traffic lights that were not working.

Mrs. JPC had sent a text asking me to stop by the grocery store to pick up a thing or two on the way home.  My usual pick-something-up-on-the-way-home store looked dark and there were very few cars in the parking lot.  That its power was out was made all the more likely because the two traffic lights nearest to it were dark as well.

I went to another store farther away (but conveniently located next to the Chinese takeout place) and decided to try my luck there.  I went in and most of the lights were out there as well, although some were still on and some of the cash registers were working.  The deli (where I needed to go) was, however, dark and unoccupied.  Strike two.

I called home and we agreed to forgo the grocery run.  I walked into the Chinese place and settled in for a wait.  The lady ahead of me told me that she had been in the middle of preparing dinner for her family when their power went out.  The restaurant seemed understaffed and it took much longer than usual to get my food.

But I got it and went home.  Of course I waited until I finished my meal before I opened the fortune cookie.  Because I was raised by Germans and dessert has to wait until after you have cleaned your plate.

“OK, *now* you tell me it’s my lucky day.”  Perhaps I did not get the notification because I had to get past the miserable part of my lucky day first.  Maybe a lucky day does not necessarily mean an entire lucky day.  Then again, the lawyer in me understands the argument that a lucky day can actually be a twenty-four hour period following the declaration of the day as lucky.  So a lucky day that begins at 7 pm on Saturday and goes through 6:59 pm on Sunday could be a perfectly fine lucky day.

That kind of lucky day would work out just fine because the worst parts of my day were already over.  Now I was ready for my lucky day to begin.  Perhaps I would finally be holding that winning lottery ticket?  That would be a pretty good way for a lucky day to identify itself.  There would be a drawing later that night so perhaps I could go to bed with my life and wake up to a new life – one in which I am fabulously rich.

Sunday began (and my lucky day continued) with a nice quiet morning at home before I greeted two of my kids so that we could take a two hour drive north to see some family that we don’t often get to see.  We had a great day with extended family and a safe trip there and back.

As we came down the street it was evident that all the houses on the opposite side of the street were dark.  Over twenty-four hours had passed since the windstorm and they were still doing without electricity.  The air was thick with wood smoke from fireplaces and the sound of a portable generator or two could be heard somewhere down the street.

It was then that I realized that the prior twenty-four hour period had indeed been my lucky day.  I had enjoyed a nice quiet evening at home with the one I love, got to visit with family and topped it all off with a steady, uninterrupted stream of electricity to my place of residence.  Which was something that nobody on the other side of my street could not say (and would not be able to say again until midday on Monday).  Except for the guy who bought the whole-house emergency generator.  My lucky day certainly cost less than his.

I would not have turned down some winning lottery numbers, but as it was my day turned out to be pretty lucky even without them.  Perhaps we should get Chinese carry-out more often.