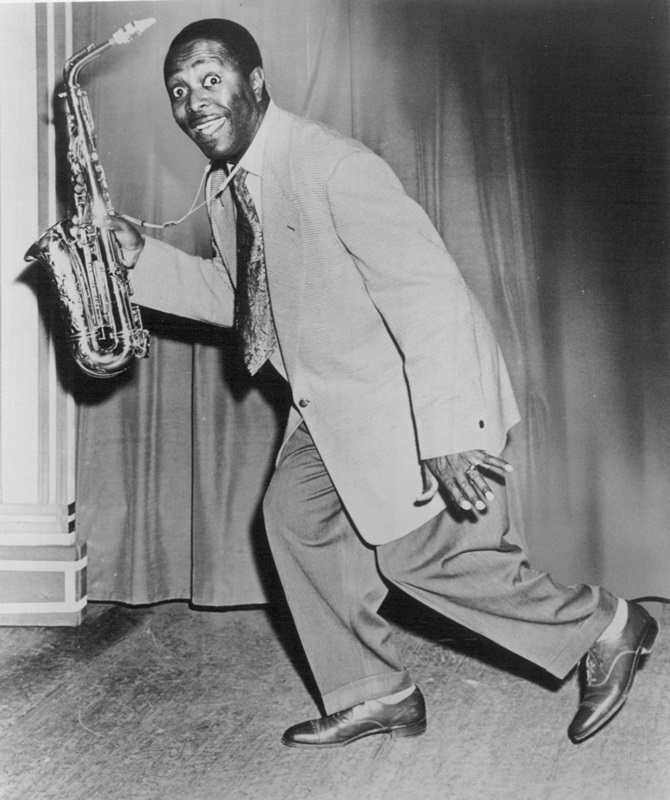 Music breaks down into certain eras and jazz is no different.  Some records are fat in the middle of an era and others are at the ragged edge of one era as it begins to morph into another.  It is these periods of transition between musical styles that fascinate me.

We have previously examined the sometimes awkward progress from the square-rigged bouncy jazz of the 1920s to the smooth, flowing swing of the mid ’30s.  Today let us examine the other end – a time when jazz was fragmenting in several directions, one of which was becoming what would only later be called rock and roll.

Louie Jordan is not tremendously well remembered today but in the 1940’s he was a recording powerhouse.  His most notable achievement was that he was that rare black musician who found the secret formula for appealing to both black and white audiences.  He did not do so by toning down his music to appeal to the mainstream but by his infectious senses of rhythm and of fun that made authentically black music appeal to almost everyone.

Born in Arkansas in 1908, Jordan was of the generation that owned jazz in the 1930s and 40s.  After stints with a couple of smaller outfits Jordan got hired by Chick Webb in 1936.  The Chick Webb band called the Savoy Ballroom in New York its home and it was one of the best of its segregated era, regardless of color.  In addition to playing saxophone Jordan shared singing duties with a young Ella Fitzgerald.

Jordan ventured out on his own in 1938 (with an assist from Webb who fired him for attempting to poach some players).  He called his group the Tympany Five, which consisted of a constantly changing crew of musicians.

From an obscure but highly creative stint in Cedar Rapids, Iowa in 1941, Jordan progressed to fame and fortune by 1943 with a record titled Ration Blues which proved his first big crossover hit to mainstream audiences.  He followed up with many hits like The G I Jive, Is You Is (Or Is You Ain’t My Baby) and Ain’t Nobody Here But Us Chickens.  Listen to any of them (or look at these pictures) and you will see that the man performed with a personality as big as all outdoors. 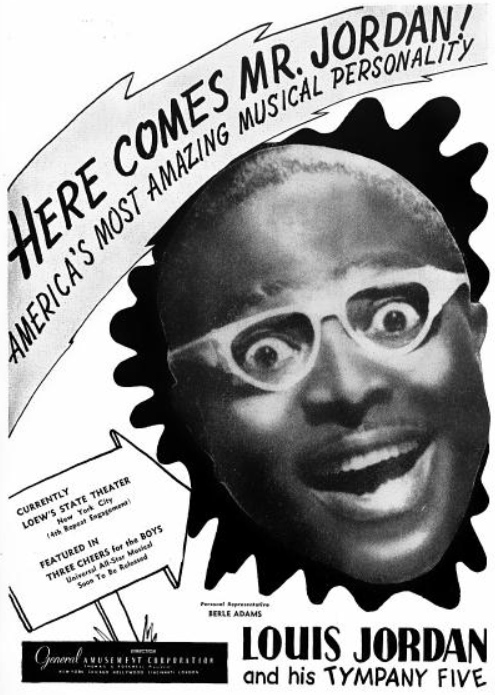 Jordan did many things differently from the more traditional jazz outfits of the mid ’40s.  First, he was a small combo of five-ish players.  These small groups were much cheaper to book than the more typical bands that were often fifteen pieces or more and therefore bookings came easily.  He also sung more like a solo act backed by a few musicians instead of as a bandleader who would sing a few songs.  The trend away from instrumentals and towards vocals was in full swing in the ’40s and Jordan was right there.

Then there was his musical style.  It has been called “jump” for a style that stirred traditonal swing, blues and boogie-woogie into a rollicking rhythm that appealed to both listeners and dancers. 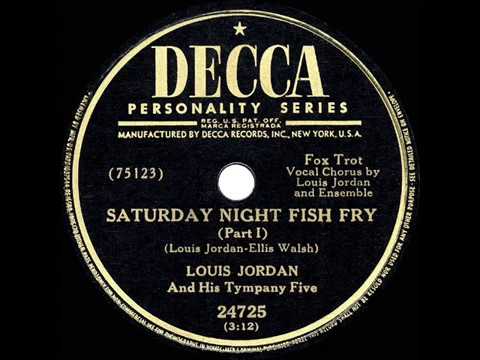 This 1949 recording of Saturday Night Fish Fry is one of Jordan’s best from the peak of his popularity.  Although the song was first recorded by another group, the demo disc mysteriously found its way into the hands of Jordan’s agent and – here we are.

The threshold question is this: is it jazz?  It is indisputable that jazz was splintering into many different directions in the second half of the 1940s.  We have already looked at three of them in Dizzy Gillespie who led the bebop movement, Sarah Vaughan who headed more in a pop/blues direction and Nat King Cole who kept a more traditional flame burning.  This record shows the stirrings of what would become rhythm & blues and/or rock & roll.

If you listen to the basic rhythm you can pick out a number of styles.  It is evident that the players were deeply steeped in the swing tradition.  The drummer works the high hat cymbal with an unwavering swing rhythm.  But this isn’t traditional swing.

This is also an early popularization of the electric guitar, and not the crisp, clean guitar of most jazz guitarists of the period but a fuzzy, distorted sound that would become widespread in early rock music. 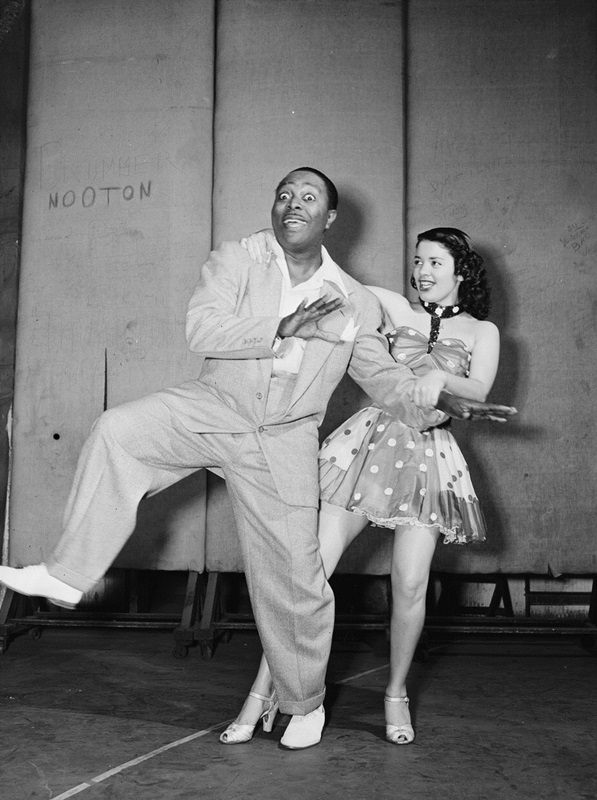 Then there are Jordan’s vocals.  Louie Jordan was not a traditional singer who emphasized a melody, or a traditional jazz singer who might improvise around a song’s set melody with one of his own.  Jordan’s vocals (this one in particular) could almost be considered a kind of percussion.  There were very few actual notes but the phrasing was pure story set to rhythm.  There have even been a few who have considered this record as a sort of Paleozoic rap.

And those stories were fabulous.  Blues is often about the lament of how nasty and brutish love and life can be.  Jordan, however, often sung of an American black experience that emphasized the fun times.  Even in this song about a party where things go terribly wrong, Jordan’s lyrics invite us all to experience a vibrant world that was well known in the black neighborhoods in a way that makes us see black life through his generous spirit and fun-loving heart.

This recording from August of 1949 ran over five minutes and was released on two sides of a 78 rpm disc.  It immediately made a run up to the top of the R&B charts where it stayed for twelve weeks and also broke through to the national charts where it hit number 21 – a rarity then for a record in such an unapologetically black style (“race records” as they were then called).

After charting over fifty singles between 1942 and 1951, Jordan’s career went into a terminal decline as rock & roll took over the music business.  Despite early rockers such as Chuck Berry later acknowledging his influence on their music, Louis Jordan sunk into irrelevance and obscurity in an arc that only steepened after his 1975 death.  Jordan seems to follow the general rule for jazz performers after, say, 1945: The more popular a musician is at his peak the less his legacy will hold up over the long haul.  Which is a shame, because Louis Jordan was more than just a novelty act.

So is this one of the last gasps of jazz as popular music?  Or the first stirrings of rock & roll?  My answer is that Louis & Company were too old and established in the swing tradition to be legitimate rock pioneers.  However, they undoubtedly had the musical reach (among both musicians and listeners) to pave the way for the Next Big Thing.

Some argue that Ike Turner’s 1951 recording of Rocket 88 (under the pseudonym Jackie Brenston & his Delta Cats) was actually the first rock & roll record.  This is a debate that I do not intend to enter.  I will, however, suggest that if you listen to Rocket 88 you may hear a little hint of Louis Jordan in it.  Which is in no way a bad thing.

Image of original 78 rpm record label and audio file from the YouTube channel of MusicProf78 (which is awesome, by the way.)  Update: Now known as the78prof.

1944 Advertisement in Billboard Magazine, pre-1978 image with no copyright markings.

Final two photos: 1946 photographs by William Gottleib, transferred into the public domain by the photographer.