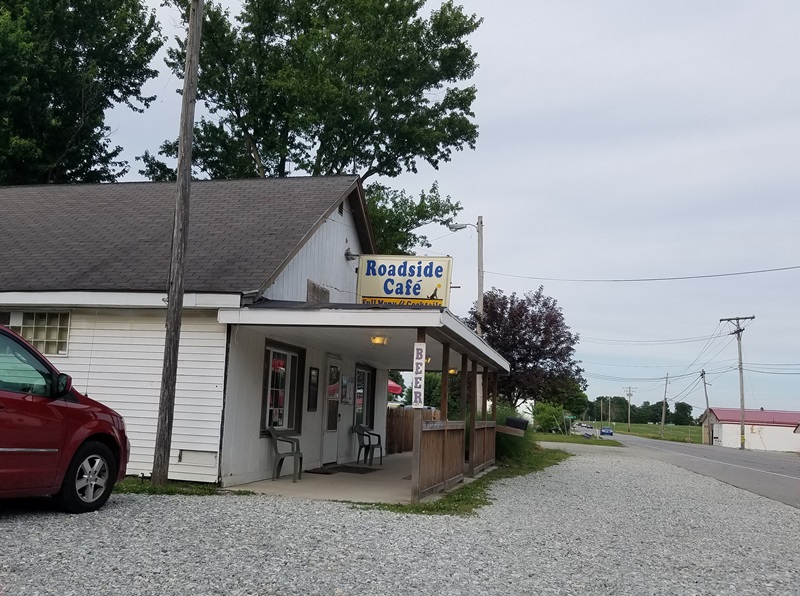 I don’t go to a many bars.  I enjoy a drink from time to time but usually do so with a meal or in the evening at home.  I do, however, enjoy dining out. My Mrs. is also a fan of dining out.  She has often stated that her favorite meal is the one she does not have to prepare.  And sometimes a bar is just the kind of place that serves up something good.

I am a fan of comfort food, something that is getting harder and harder to find.  Simple food done well and served up for a reasonable price is not as common as it once was for we city-dwellers.  It seems that the best comfort food I have found in recent years has come from little out-of-the-way bars.

When we were younger and were traveling, we followed a rule: When it was time to stop for food, it was not allowed to eat anyplace that was available at home.  A chain was within the rule so long as it was a chain that was not represented in our area.

More often than not we got a meal that we would mark down in the Win column.  We developed an appreciation for the small “Mom and Pop” places that were literally one of a kind.

But then it happened – Kids.  Travel with small children is always an adventure and I will freely admit that we just lacked the stamina to get into an argument before every meal.  You parents know the argument, it always involved a dispute between 1) the place Mom and Dad find appealing and 2) the big sign that the kids are used to seeing at home.  In our case that big sign usually said “McDonalds.”

When dining with children on a trip “The Known” has a powerful pull.  The Known allowed us to completely avoid the “What’s the matter with these chicken fingers?  You love chicken fingers when we go out at home” discussion.  Because the food that comes through the windows at a McDonalds in Philadelphia or Chicago or San Diego is the very same stuff that comes through the window at home in Indianapolis.

The kids are, however, in their twenties and on their own now, leaving Mom and Dad to live the empty nester life.  And we are getting our dining swag back.  In the past couple of months we have had two experiences that are quite similar and at the same time quite different.

The first came when we were taken off our usual route home from a trip to see my ailing mother and passed a place that looked interesting.  Not appealing, just interesting.  There seemed to be a lot of cars there and my Mrs. looked it up online.  She was surprised to find that The Roadside Cafe came back with some pretty good reviews.

Now we have become a little wary of online reviews for places like this ever since stopping at a little restaurant that also had pretty good reviews – eight of them, in fact.  Which was probably the number of close friends and family members who were talked into shilling the place online.  We did not add a ninth.

This place, however, had lots of reviews and looked a little intriguing.  And so a week or two later after some dinner-out plans fell through, we decided to take a short road trip and give the place a try.

I should say that we are middle class suburbanites.  Although I would blend into the scenery in a Home Depot store or an Olive Garden restaurant, such would not be the case here.  Sticking out like a beach ball in the refrigerator was a given.  A restaurant with an aluminum storm door is always your first clue that you are not walking into an Applebees.

The next thing I noticed was the smoke.  In my own area, smoking in restaurants has been illegal for a few years and I have taken for granted that when I go into a place to eat there will not be secondhand smoke to worry about.  Well not here.  Had I not quit smoking a bit over 28 years ago I would have been really excited about this aspect of the place.

To our left was an L shaped bar.  Each stool  was occupied by one of “the regulars”.  We found ourselves a booth and were quickly greeted by the bartender.  “Been here before?” was his question, and not an unreasonable one based on our looks.  We admitted that this was our first time.  “Well first, we’re glad you stopped in.  Can I get ya somethin’ ta drink?”

I looked around.  Cutty Sark coasters.  Some kind of fighting or wrestling on TV.  Steady stream of 1970s-80s rock music coming from a jukebox.  I decided to go for a Yuengling.  I have been happy that they have finally come to my area.  It is my new “go-to” regular beer.  “Good choice” was his response.  Mrs. was a little slower to pick up on the clues and asked for a Guinness.  Which is what I would usually order too.  “Sorry, we don’t have Guinness.”  Two Yuenglings then.

This.  This is why we do this.  Both of us ordered the special and ended up with no regrets.  Was it the best food I have ever had?  No.  Was it the largest portion I have ever been served?  No again.  But was it a good solid meal that tasted very good, filled me up and was priced right?  Absolutely, and with first rate friendly service to go along with it.

We talked, we ate and completely enjoyed our meals.  Both as we ate them and when we paid.  Which is not something that happens all that much any more.

A week later one of our kids took us out to a little bar down the street from his new apartment.  This place is an old northside Indianapolis institution, the kind of place that looks like time came to a stop in about 1951 and is still waiting for someone to come along to restart it.

The jukebox was stocked with music that pre-dated the Eisenhower Administration and the painted murals above the bar looked like they were old when that music was originally recorded.

We did not feel as out of place here because the neighborhood is on the upswing and has even become a little trendy.  Fortunately, this place has found the ability to accept the trendiness that surrounds it without selling its soul to the hipsters.

This time the menu was much simpler – a cheeseburger would be the go-to item, along with a side of potato salad.  And a beer, of course.  This time I caved and ordered something that a local microbrewer had concocted especially for this establishment.  Yes, I am a sellout when the peer-pressure is applied.

Once again we came into a place and became a small but temporary part of a little community.

In both places we were strangers.  We stuck out in places where most everyone else was a regular.  But we could not have been welcomed more or treated better.  A good honest meal is something not easy to find these days.  It is even better when it can be accompanied by a cold beer and a warm welcome.

10 thoughts on “Strangers In A Strange Land”