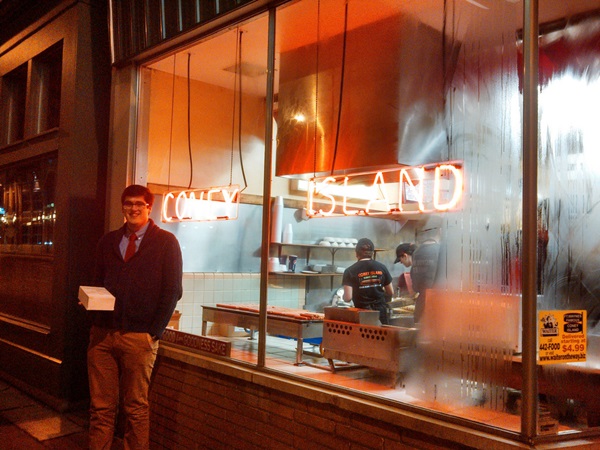 Once a fellow gets to a certain age, the title of Thomas Wolfe’s book You Can’t Go Home Again proves itself true time after time.  All of the familiar places and things from childhood disappear, leaving nothing but memories in their places.  There are, however, rare exceptions.

I grew up in Fort Wayne, Indiana and spent many happy years there.  But I have reached a point in life where the number of years living elsewhere has surpassed the number of years my hometown was actually home.  And because family and friends have moved away there is little to bring me back.

So much is gone from the days of my youth.  My mother moved from my childhood home nearly twenty years ago.  The record store downtown where I spent so much of my money and Atz’s Ice Cream parlor where I put away so many calories are nothing but memories now.   And just forget about listening to WOWO’s booming 50,000 watt signal all across the eastern half of the U.S.  But one thing remains almost just as it was:  Coney Island.

My first all-day summer job was working at the Fort Wayne Public Library downtown.  There were other teens working there, which may have been the only thing to relieve the pure tedium.  Have you ever re-shelved books all day?  I’ll tell you about it sometime.  Let’s just say that our lunchtime break was most welcome.  Lunch out at some nearby place was our daily treat to ourselves.

At that time there were a few places downtown that I knew well.  Penguin Point was a regional burger and fried chicken place and their nearby location was a favorite.  There was also a little place called The Solar Room, which was a lunchcounter in the basement of an office building where my father had an office.  There was a small bald man in a white apron who made the best grilled ham and cheese sandwiches I have had to this day.

But one day one of the other guys suggested Coney Island.  I had never heard of the place.  My own family had never gone there and if I had ever noticed it, there was not much that was inviting on that seedy block of E. Main Street.  My friend Nick, however, knew it well and thereafter it became one of our regular haunts.  What is funny is that after discovering it, it seemed that absolutely everybody in Fort Wayne knew all about it.  Even my father, who explained that his distaste for onions kept him away.  I say it was just his Philadelphia palate unable to adapt.

In business since 1914 and owned by the same family since 1916, this is one of the last of the old-school dining experiences left.  You take a seat at the counter or one of the enameled tables and give your order to the person who comes and asks “Whaddleyahave?”  A typical response is “3 and a coke”  It is not necessary to specify what the three will be three of, as it is just a given that it will be three of their signature item: the Coney Island hot dog.

This staple of Fort Wayne life begins with a thin frankfurter from the flat grille in the front window.  It is placed into a steamed white bun.  It then gets a drizzle of mustard and several spoonfuls of their signature sauce, topped off by a bunch of freshly chopped white onions.  (For those not into onions, the ordering term is “without”.)  Although I am not always a fan of the humble onion, I relish them (sorry) on a classic Coney.

Don’t expect any fries with that (or any chicken tenders for the kids) because that’s not what they do.  And don’t expect stuff like poppy seed buns or fancy toppings – for those things, go to Chicago.  They do offer what I have been told is the best hamburger in Fort Wayne (which I have never been able to try because of my inability to pass up the Coney dogs), along with chili, baked beans and a glass case full of pies from a local bakery.   And you can still get a glass bottle of Coca Cola, complete with a straw out the top for the ladies.

I will not say that time has totally stood still (although the counter stools and tables have).  The family members behind the counter are different now.  Mike Choka passed away at a young age and his father Russ eventually retired.   You can get your soft drink in a cup from a fountain and the cash register is now of the electronic kind.  But unlike some other places that have been unable to handle the translation from one generation to another, this little hot dog joint (said by some to be the oldest in America) continues to thrive in the era of social media, where it is active.

Food, like so many other things, has become so stratified.  Older diners like familiar favorites while the young and hip gravitate to trendy places serving food that their grandparents wouldn’t recognize.  And at prices that their grandparents wouldn’t recognize either.  But Coney Island is a throwback.  On any given day or night you will find young and old, rich poor and middle class all eating (and enjoying) food from the same limited menu.

There is a lot of talk today about “comfort food”.  Coney Island in Fort Wayne notches the concept of comfort food to the extreme high end of the dial with a complete comfort experience, and in the very best way. 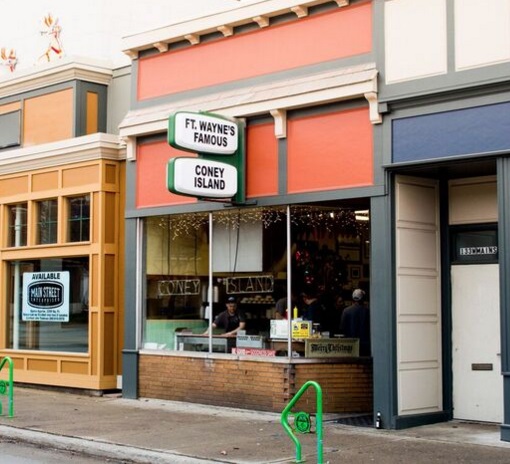 All of this came rushing into my mind one day recently when I found myself on some family business in Fort Wayne for the first time in quite awhile.  Even though our time together finished with a nice, modern lunch at McAllister’s Deli, my next stop was downtown to snag a dozen to take home (because they reheat wonderfully).  As I walked in the door and stood at the counter it struck me again that this was a piece of America that has become increasingly hard to find as time goes on.  Standing at that counter and ordering “A Dozen To Go”, it could be 2017 or 1977 – and it doesn’t matter what kind of problems are happening out there in the world or who is President.

I was with sadness when I wrote about the closing of Balyeats Coffee Shop in Van Wert, Ohio and sadder still when the reboot under new ownership failed to sustain orbit.  But Coney Island has weathered those generational shifts, and quite a few more times than once.

I close this little bit of sentimentality with a sense of peace and serenity that can only come from the knowledge that in one narrow storefront on E. Main Street in Fort Wayne, Indiana, God is in his Heaven and all is right with the world.

Author’s note:  The source of several photographs above are from Coney Island’s own website, which is located at http://www.fortwaynesfamousconeyisland.com/   I am hopeful that they will be cool with this not only because I make no money from this blog, but also because I love their food so much!