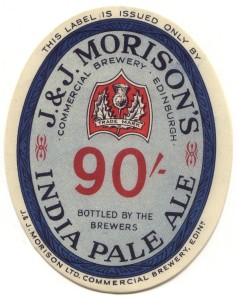 I like beer.  I don’t go gaga over it, but I like it.  Some of it I like quite a lot.  The recent proliferation of small brewers gives we casual beer drinkers a variety of brews to sample that was unheard of when I was a young kid collecting beer cans.  We have broken out of the old habits of lagers and pilseners and have a stunning number of choices today.  But why must so many of them be IPAs?

IPAs (as beer people never tire of explaining to me) stands for India Pale Ale, and was brewed with a higher-than-normal concentration of hops, which allowed English beer to be shipped to outposts in India without spoiling.  Which is a very interesting story.  About something that just doesn’t really matter in 2016.

When I buy beer, I only need it to withstand the drive home before it gets, you know, refrigerated.  I think that modern ships sailing to India are able to take advantage of this technology as well.  So why are we still brewing this bitter stuff that can last for months in searing heat with insects flying all around?  I have no idea.

First, I don’t really like the taste of an IPA.  It is really quite bitter.  I am more of a stout man myself, though in warmer weather I can compromise and drink a brew that has a lower viscosity than the 30 weight motor oil which most closely approximates my favored Guinness.

But more than just the taste, I am tired of the whole IPA fad.  Why, in this cornucopia of individual brewers, must everyone drink the same silly thing?  But I suppose the herd mentality is hard to stamp out.  I remember a few years ago when it seemed impossible to go into a restaurant without having the snooty waiter telling me about how “our special tonight is an herb-encrusted Chilean sea bass.”  Really, those fish must have been positively jumping into the fishermens’ boats to satisfy everyone in the U.S. who just had to have some.

I suppose that there is really nothing to be done about it but do what I have been doing, which is to scour every brewpub’s beer menu for what seems like the six non-IPA selections which they deign to make available for cretins like me.  Oh wait, four if you exclude the fruity wheat beers.  I can just hear the conversation in the back: “You know, this brewing thing would be so easy without those same five people who won’t drink the IPAs that everyone wants.  (Sigh)  But I suppose we had better see about scratching something up for them.  Have we done anything with tree bark or recycled tires?”

The good news is that sooner or later, the hopped-up IPA fad will be over and some other variety will be in the brewers’ and drinkers’ spotlight.  But until then, I will just have to soldier along in the beer-drinker’s ghetto, with waiters looking at me as if I have just ordered a Strohs.  Which, as I think about it, is something I could have a little fun with next time I stroll into IPA Land.  “Do you have anything that is fire brewed? Or maybe something made with a Detroit-style water?”  I know I will be able to do it.  But maybe not with a straight face.