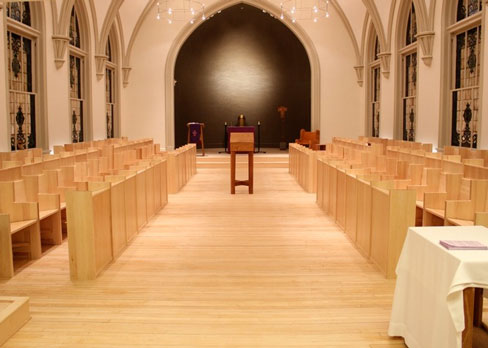 The first thing I noticed was the silence.  In the chapel of a Dominican Priory, the men were meeting for evening prayer, and our arrival for a weekend visit had us there not long before its start.  They entered the chapel one by one or two by two, walking past us in their flowing white habits.  The sound of their footsteps as they walked across the creaky one hundred-year-old floor was the only sound that interrupted the distant whirr of the ventilation system.

Some of them looked over and smiled to acknowledge the guests joining them, while others looked ahead as they trod towards their choir stalls, the small individual benches that faced one another across the chapel.  As we sat waiting for prayer to begin, I noticed the faint remnants of the incense that had burned the weekend before.

Then came the two loud knocks as one of the brothers rapped his knuckles on the choir stall, giving the signal for all present to rise. Evening prayer would begin with a hymn.  That hymn set the tone, for it was not one of group-huggish 1980s pieces that are sung all too commonly out in the parishes.  Prayer would begin with a traditional hymn of a reverent (if somewhat somber) tone, the kind that reminds us that God is God and we are not.  For me, at least, such a reminder is always quite liberating since society at large seems to demand that I be God of my own life so frequently.

After the hymn, two cantors led in the chanting of a psalm, with one side of the chapel reciting one stanza, and then the other side, back and forth through the verses.  I noticed from the hymn and the psalms the deep, calm sound of the male voices, which was such a contrast to the predominance of female voices heard in my parish church.  There was something about those deep voices, all in unison, that is difficult to describe, but which lent an air of peace and even mysticism to the experience.

Gregorian chant, or anything like it, has all but disappeared from Catholic worship as found in most parish churches.  Here, however, chant is the norm.  Its simple note progressions (I hesitate to call them melodies) have stuck with me over the time since I returned home.  I may not recall most of the words of a particular psalm, but I have found myself humming the chants with a few words coming to me here or there.   Doing so brings me an incredibly peaceful feeling.

The Dominican Order of priests and brothers exists primarily to study and to proclaim the Gospel, mainly through preaching.  But to do so well, it is their way to come together in community every morning and every evening for prayer.  Their prayer is highly liturgical with most of it sung.  After a scripture reading and another psalm, prayer has come to a close and the men file out of the chapel as silently as they entered it.

The men at the Priory are not an Order of men cloistered from the world, but are engaged in busy lives of teaching, taking classes, writing, doing chores and managing their many competing roles.  But they are never too busy as a community to come together at 8 a.m. and at 5 p.m. for community prayer.  This kind of regular common prayer has a way of reminding a person of what should be First Things in life, particularly in life as a Dominican.

Since returning home, I have found that I miss the peace that comes from the enforced break from life that comes with morning and evening prayer as the Dominicans practice it.  Although my home life lacks their community, perhaps I should use my last week of Lent to give the practice a try on my own, even if silently.

2 thoughts on “Men At Work: Dominicans At Prayer”