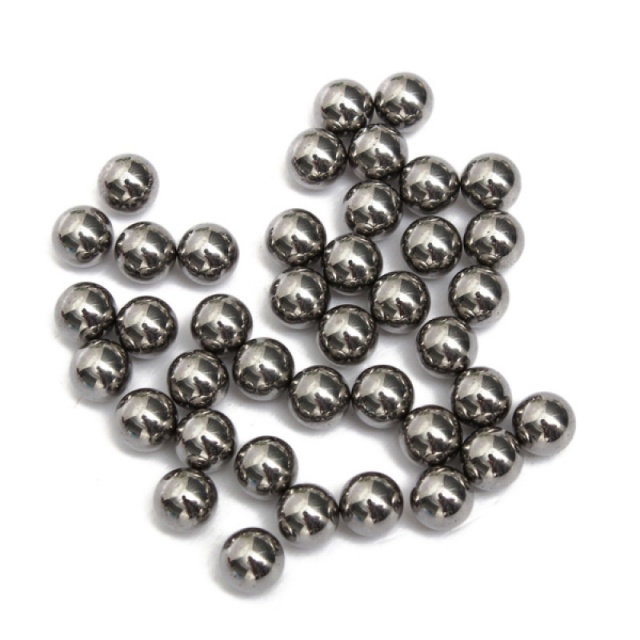 I am going to confess that I have become one of “those people”.  OK, there are a lot of people we could call “those people” – but for today’s purpose “those people” will be one of those who often says “why didn’t you just look online?”  The world of online commerce has been a wonderful thing.  Crucial, even – as in times of, say, a COVID-19 emergency.  But even this far into the 21st Century, sometimes it is simply a fail.

I can remember when things started off with books and music.  “Soon”, they told us, “you will get your groceries this way.”  They are still fine tuning the grocery thing, but the world of e-commerce has become, well, something.

It seems that e-commerce is particularly successful in two fields.  The big one is for small, name-brand or known-quality goods which can be easily shipped.  We all know them.  The other is for the niche business – the place that develops a presence as provider of obscure, specialty items.  This is the kind of place that could never work in a physical store in most places, but can make it with the kind of volume that comes from a nation (or world) wide customer base.  Which brings me to how I lost my bearings.

A good number of years back we bought a piece of exercise equipment – a recumbent bike.  The kind with a relatively comfy low seat and pedals out in front of you – like a Corvette for six year olds.  Being who we are, we bought it used at one of those places that takes advantage of other peoples’ rash New Years resolutions by buying fitness equipment at garage sales and re-selling it after a little spiff and tune.

The bike served us well for quite a long time.  Personally, I have liked it best when I can gaze at it from my family room recliner as I sip on a beer and chomp pretzels as I watch television.  Exercise equipment will last virtually forever with this kind of use, I tell myself.  But then I get on the scale and decide that the exercise bike is going to have to sacrifice itself for awhile so that I can get back in trim.  Or maybe get in trim?  It helps to be optimistic, and is so hard to work up enthusiasm when you are basically healthy.

Sooooo, I finally rolled out of bed and donned my workout duds (which I had dutifully found and placed out the previous evening).  I trudged down to the bike and began my session.  But saw immediately that something was horribly wrong.  The pedals clanked and shifted wildly as they went round and round.  This was not right at all.

I wondered why Mrs. JPC had never said anything.  Did she not notice?  Or did it just not bother her?  Well it bothered me – when something mechanical is not right I cannot be in a proper frame of mind until it is fixed. 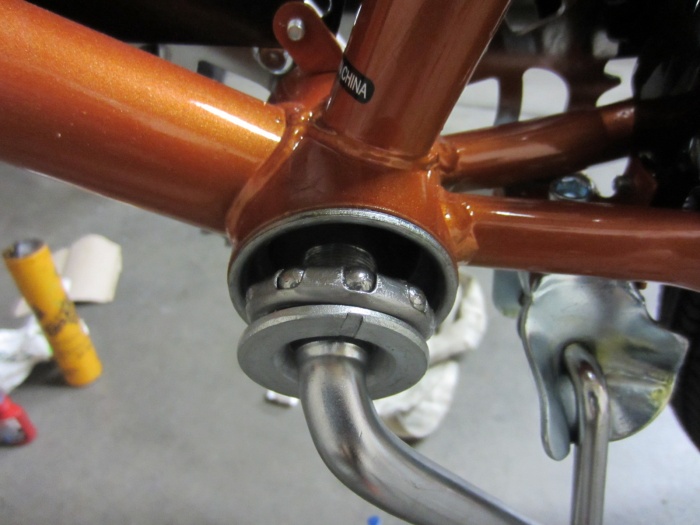 For illustration purposes only. Because you know that you always wanted to see what went on inside of the pedal hub of your bicycle.

The locknuts that hold the bearing must need tightening (said my optimistic self).  My cynical self that would have asked “and why would it need tightening?” must have been too sleepy at the moment.  I took the plastic case off and tightened down the lock nut (which was not loose) so that the play was gone.  “All fixed” I thought, with a great sense of satisfaction.  Until the next morning.

When I began my pedal session the next morning (I was quite proud of going right back the next day, by the way) it was clear that my fix job had solved one problem but highlighted another – there was a terrible friction and unpleasant noises coming from the mechanism.  Another dive into the bowels of the beast was called for.  But not before a few days off from my exercise routine. 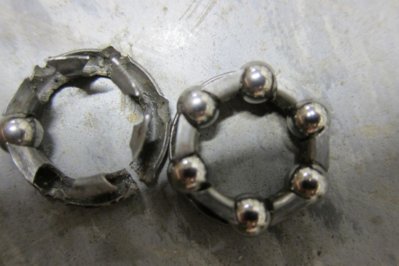 See the one on the left? It looks better than mine did. There is still one of the ball bearings in it.

So last Saturday I went in again.  As I got the locknut loose and looked behind it the problem was evident.  A pair of mangled ball-bearing holders (called cages) makes for a terrible kind of bearing.  Especially after all of the ball bearings had broken free of their little prisons and made a break for the wide-open spaces inside the bike frame.

OK, my exercise bike clearly needed new bearings.  This will be a cinch, I thought.  I immediately went to the internet.  I knew the manufacturer, the model, the serial number.  I began my search.  I soon decided that I had not spent enough money on our little bike because there seemed to be no parts support through the manufacturer.

Surely, I thought, there would be a business in some little place like Tazewell Tennessee or New Glarus, Wisconsin where some enterprising soul had set up a mecca for replacement parts for every kind of exercise equipment known to man.  I found a couple that handled stuff for maybe a dozen major brand names, but nothing like the EveryExerciseBikeBrandKnownToMankind.com I was looking for.

I next expanded my search to bike parts emporiums.  Surely this had to be some kind of standard part.  All I needed was the measurement.  But everything seemed geared to manufacturer again and not towards an easily searchable array of bearing types and sizes so that I could compare what I had to what they had and find a match.

After about an hour or more of this, it was about 2:30 in the afternoon and I was ready to quit.  Then I decided that I would give “old-school” a try.  About ten minutes from my house is an old bicycle dealer that was surely selling new Schwinns in the 1950’s.  I knew they had a first rate service department and decided to try them. 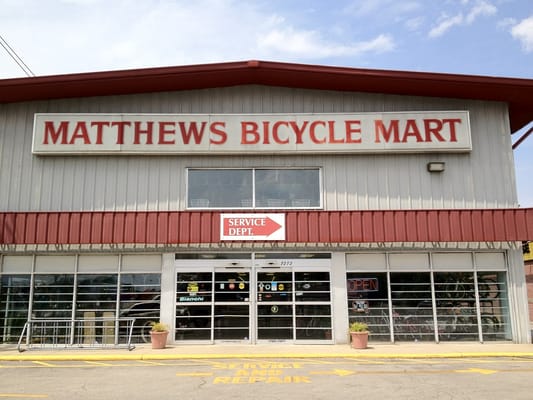 Matthews Bicycles is in an old building in a part of the city that were the suburbs sixty years ago.  I drove around to the back where the service entrance is, and walked in.  “How are you doing?” asked a friendly guy about my age.  “I think you are about to tell me” was my reply.  I dropped the little Ziplock bag containing the remains of my old bearings on the counter.  “Got anything like this?” I asked.  “Absolutely” was the reply. 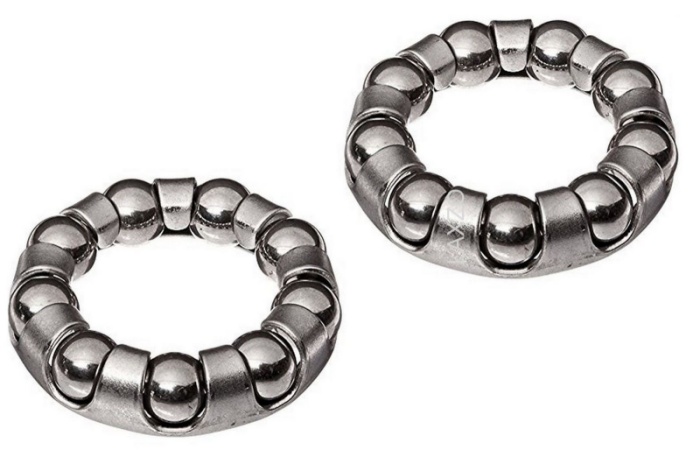 Five minutes and $20 later I had a fresh pair of bearings and some free advice on putting them in.  I was so happy that I forgot to ask about some grease, which they would probably have had too.  I figured that I had some in my garage, but I had last fooled with wheel bearings on a car in the 1980’s, and had probably used grease I had bought in the 1970’s, so maybe a fresh can would not be a bad idea.  Another $5.99 at the auto parts store and I was in business.  I read the curious small print (yes, I’m a lawyer) and saw that this grease did not comply with Ford’s grease standard.  Ford uses some special kind of grease?  Really?  But fortunately, neither my bike nor the bearings were made by Ford.

By that evening my bike was back in business, all ready for me to ignore for the rest of the night.  But how odd, I thought, that I had proved the internet to be completely useless.  And how great that an old-school bike shop was there to solve a problem that most would have solved by putting the machine out for the trash.  A win-win.

Except that now I have to get back on the stupid exercise bike.

The bearings – who the heck cares about pictures of bearings.