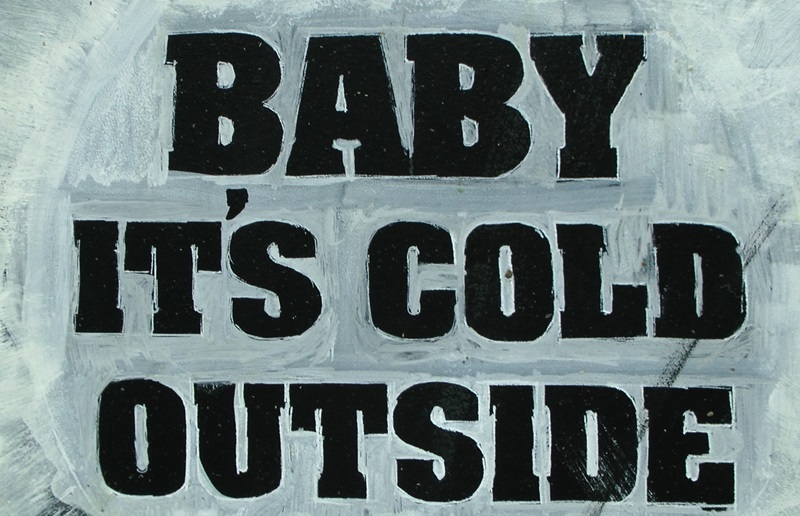 Much of the modern world has jumped with both feet onto the neck of the song Baby It’s Cold Outside.  The song has become popular on holiday playlists but has come in for some backlash in our modern #metoo movement.

I am not one for jumping onto bandwagons, but am prepared to jump onto this one.  But being ever the contrarian, will do so for a completely unrelated reason: The song has nothing to do with Christmas, Hanukkah, Kwanzaa, New Year, the Winter Solstice or any other possible holiday being celebrated by anybody during the month of December.

I have written before about the dearth of decent modern Christmas songs and my preference for the older carols that have all but gone extinct in our secularized culture.

I am not sure exactly when I went from “hey, there’s an all-Christmas-Music-station on the radio!” to “Groan (forehead slap) there’s an all-Christmas-Music-station on the radio. Grumble.”  I think it was around the time when Christmas albums from every minorly famous celebrity after 1980 began to elbow their way onto the playlists in a never-ending stream of forgettable banality.  My, but do I sound a bit like the Grinch this year.

So we have lost Oh Little Town Of Bethlehem and Oh Come All Ye Faithful but picked up . . .  well, I can’t remember.  And it doesn’t bother me.

However, enough program directors must inherently understand my argument that there has not been a decent Christmas album made since 1960 because they began looking for stuff from the 1940s and ’50s to balance out Niki Minaj and Justin Bieber.  And Lo, someone remembered Baby It’s Cold Outside and invited it in to warm itself in front of a holiday fire.

First off, I would rather listen to Baby It’s Cold Outside than almost anything else played on a modern Christmas station.  I should note that I am a “music guy” much more than I am a “lyrics guy” so for many popular songs I would have a hard time reciting more than about 15% of the words.

And in defense of these lyrics, one point I have not seen made is that the song dates from an era where virtually all of society provided a supportive backstop for the young woman when she decided to go home.  Notice that the guy spends all of his time trying to overcome this societal bias in favor of chastity, and it is not a foregone conclusion that he succeeded.

But.  It.  Has.  Nothing.  To.  Do.  With.  Christmas.  Whether you consider it to be stylish mid-century flirting or something more along the lines of Bill Cosby and his extra-festive (for him, at least) cocktails, we can all agree on one thing: It is about a man and a woman inside and a cold night outside.  Cold – That’s it.  No mention of Christmas, a tree, presents, holly, or any other marker of the season, no matter how tenuous. 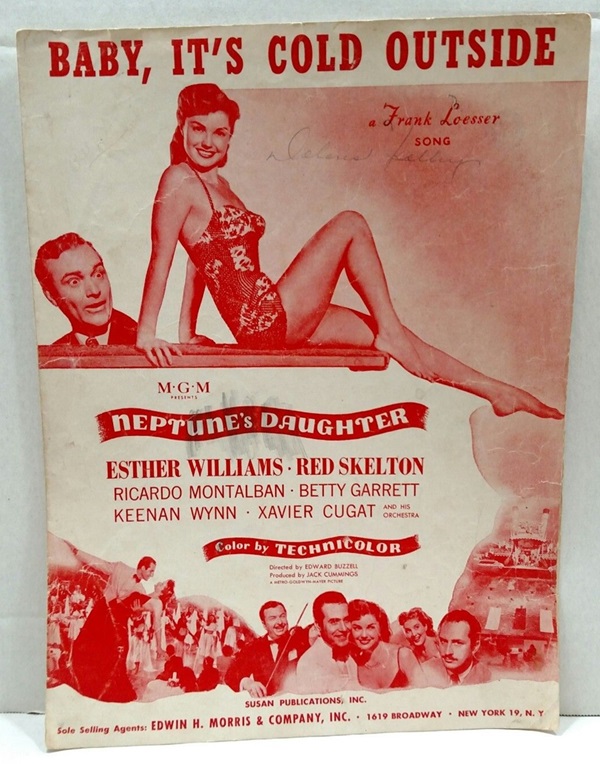 Just one look at the original sheet music tells us all we need to know – Nothing says “Christmas” like Esther Williams in a swimsuit, right?

We all know (or at least should know) that Christmas is not temperature-dependent.  Isn’t our focus on snow and blustery wind a little North-Centric for modern sensibilities?  Or perhaps now that I have brought it up, the complaint that references to cold are not inclusive of those celebrating Christmas in warm climates may be on tap for next year.  If so, I demand royalties.

Let It Snow is another song in the same category, although with lyrics with which it is harder to find fault.  I know the lyrics to that one and there is nary a syllable devoted to Christmas.  Yet there it is among the Christmas songs.  Along with Winter Wonderland and Sleigh Ride.

I would propose that there is an entire hemisphere (and large parts of the other) which celebrates Christmas in hot weather.  So should we add Ella Fitzgerald singing Cole Porter’s “It’s Too Darn Hot” to the playlist for some inclusiveness and diversity?

If we want to stick with Irving Berlin (who penned White Christmas) there is his great tune Heat Wave.  Which should be perfectly appropriate for Christmas station play in, say, Australia.  Because their winter can get mighty hot.  I wonder if that is why they drive on the other side of the road, too.   It may be backwards, but only if you refuse to put down that north-centric paradigm you cling to.

So we are left with a bit of a confusing mess in my estimation.  We have some pretty good music that has nothing to do with Christmas, and some pretty bad music that has more of a connection, at least to the extent that we can conflate kissing and falling in love with Christmas as is the case in so many modern songs.  There is, of course, a bit of overlap in this Venn Diagram, in which we find good music that is about Christmas in some way or other.  Admittedly, most of it is by Bing Crosby, Frank Sinatra and Johnny Mathis, but we must take what we can get.

And there is Eartha Kitt singing Santa Baby, which is kind of its own category.  Perhaps she was the one who saw Mommy Kissing Santa Clause and is making some demands to keep quiet?  Or is she just trying to seduce St. Nick?

In fact, I am prepared to make a deal:  You can take away Baby It’s Cold Outside if you agree to take Santa Baby along with it.  Doesn’t #metoo go both ways?

21 thoughts on “Baby It’s Bad Outside”