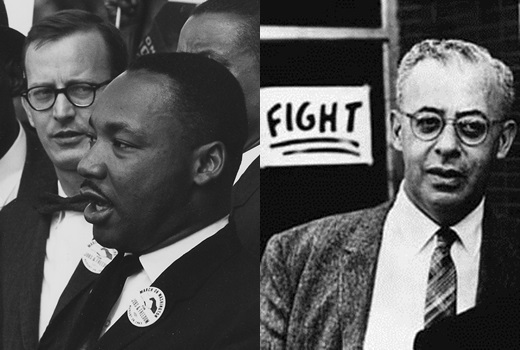 But it occurred to me recently that Dr. King is having to fight another battle, this time posthumously.  And the opponent is a surprising one.

Dr. Martin Luther King, Jr. is held in high esteem in our American society.  Every school child knows who he was and seemingly every major city has named at least a street after him.  He has had his own Federal holiday for decades now.

Most of us have read or seen King’s “I have a dream” speech, or at least parts of it.  We certainly know its point, which is that no matter our skin color we are brothers and sisters in the same human family.

How many people know who Saul Alinsky was?  Many who are politically active do, but I would suspect that most others do not.  Alinsky may have been the original “community organizer”, a job title that got wide exposure when Barack Obama was running for president in 2008.  Where Dr. King left a substantial body of written work, Alinsky is best known for a 1971 book entitled Rules For Radicals.

These brief introductions are only mentioned to give some background to the question that recently came to my mind: would the political activists of today (both left and right) buy into Dr. King’s vision if he were still here?  Or has the philosophy of Saul Alinsky taken over as the paradigm for modern political debate?

The question presented itself to me recently when I read something that quoted Dr. King from something written a little more than a decade before his tragic assassination.  One of Dr. King’s recurring themes had been nonviolence.  In a 1957 piece about the power of nonviolence, Dr. King wrote that the nonviolent resister “does not seek to humiliate or defeat the opponent, but to win his friendship and understanding. … And so at the center of our movement stood the philosophy of love.”

Saul Alinsky stands in stark contrast.  A contemporary of King, Alinsky also saw a need to help the downtrodden that he saw around him.  In his case, those victims were the poor of Chicago during the Great Depression and the years that followed.   His outlook and his methods, however, could not have been more different.

Alinsky wrote Rules for Radicals about a year before his 1972 death.  One of those Rules, Number 13, stated: “Pick the target, freeze it, personalize it, and polarize it.“ Followers were instructed to “cut off the support network and isolate the target from sympathy. Go after people and not institutions; people hurt faster than institutions.”  Where King was all about love, Alinsky was all about power.

These wildly different views are understandable when we look at the mens’ divergent backgrounds.  Dr. King was a preacher and an evangelist.  While he did not expect everyone to believe in a personal God, he surely did himself and always came from a place deeply informed by that Christian worldview.  “[T]he only way to ultimately change humanity and make for the society that we all long for is to keep love at the center of our lives.”

Although Alinsky had been raised in an observant Jewish home, he became an agnostic as an adult.  He even recognized Lucifer as perhaps the original radical in the introduction to his book.  That said, he joined Dr. King in a refusal to condone violence.  In condemning some who had resorted to revolutionary violence he wrote “we are dealing with people who are merely hiding psychosis behind a political mask.”

So we must ask – which of these two opposite approaches has become the most common one in dealing with the difficulties of our time?  And not just among those who would consider themselves as liberal or progressive activists – this choice applies to political activists all across the political spectrum.  I think the answer is, unfortunately, all too obvious.

We disagree on many things in our society today.  It seems to me that the question comes down to this: are those with whom we disagree our enemies?  Or are they friends we hope to make by demonstrating our beliefs from a place of love and respect?  Alinsky’s way seems easy and carries a visceral satisfaction that is undeniable.  King’s way is hard – and it was no easier in King’s day than it is now.

Personally, I think that we could use a lot more King and a lot less Alinsky.  It is one thing to tear down – something that both men set out to do, each in his own way.  It is quite another thing (and a much harder one) to build something better in a way that invites the participation of all.

Alinsky seems to have been unable to see beyond the idea of the downtrodden as the new overseers.  It was Dr. King who sought an eventual end to conflict by the nourishment of mutual respect and friendships.  Hatred of enemies will never be able to do this.  But love of those we disagree with can.

11 thoughts on “King v. Alinsky: Which Man Is Most Influential Today?”