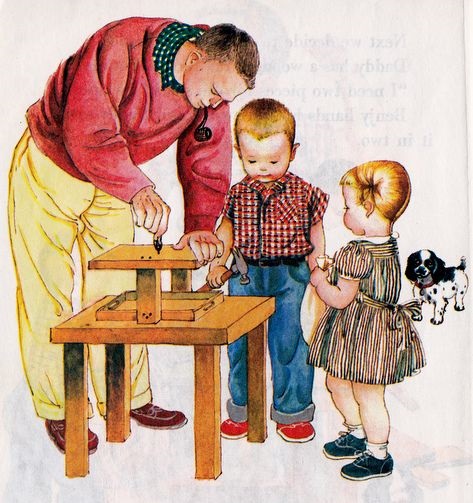 From the Golden Book We Help Daddy by Mini Stein, illustrated by Eloise Wilkin

This time of year we read and hear a lot about giving thanks.  Yesterday was Thanksgiving Day after all.  But what is it that we should be thankful for?

Yes, there are the usual suspects like having a weather-tight roof over my head and plenty of food in the pantry, for there are too many who lack these things.  Also for health and peace and for living in a country where we can elect even Donald Trump and things don’t fall completely apart.

I was going to cop out on writing today’s missive by linking you to an excellent three part story I read on another site about a week or so ago.  This would have given me some time off and you something to read – – – a win/win, right?  But after I had hatched this plan another idea crept into my noggin.

A young man I know shared on social media some really horrible experiences he had with his father while growing up.  I did not take it as a “Trash My Dad” exercise but as his way of dealing with some deeply conflicting feelings about his father, whom he loved very much.  His experiences were really jarring to me because I had once known his father very closely.  How could my old friend have done these things and how awful it must have been to have been on the receiving end of them.

It occurred to me that there is nobody who affects a young man more than his father, both in good ways and in bad ones.  This, I decided, was the one thing I was going to be thankful for this Thanksgiving: My relationship with my own father and with my children.

My father and I did not have a perfect relationship.  My parents divorced when I was very young and it is hard to develop that close bond between father and son when father and son don’t live together day to day.  That may be a topic I come back to at some time in the future, but it will not be the point today.  My father had his flaws but as I have gotten older I have realized that we all have them.  Becoming a father does not make the worst parts of your personality go away, it just means that those flaws are there for your kids to be exposed to.

I have no intention of listing my Dad’s shortcomings here, but only mention them because they pale in comparison to his many good characteristics.  My Dad could be critical but he was usually fair.  He could probe my weaknesses with alarming accuracy but he taught me to think for myself.  He never said or did mean or cruel things to me and always tried hard to be a good father despite issues that lingered between him and my mother.

I did not give my father enough credit for these positive traits when he was alive.  It turns out, though, that they became seeds that were planted deep within me, waiting on the proper season for growth.  Those seeds lay dormant until I married and had my own children, and it was then that I found myself looking to my Dad for inspiration on how to do this difficult job, for which we are not naturally equipped.

None of us is raised by a perfect parent and none of us is a perfect parent to our own kids.  There are many things that I can look back on and wish I had done differently.  But all I could do was take the best of what I could pick up from my own parents and use it in my own time as a Dad.  Isn’t that our job – to pitch overboard the worst things our parents taught us and keep the best ones?  I have tried (though not always successfully) to do this.  I was fortunate that the worst stuff I picked up was no nearly so bad as the worst stuff picked up by many others in their youth, as was the case with my friend.

I am thankful that today I have three grown kids and have a good relationship with each of them.  I am glad to be the guy they feel free to call when it is time to move some furniture or to deal with a life problem.  I am thankful that their mother and I have been able to maintain a space (physical and emotional) that they think of as “home” and that they have been there with us this holiday

Nobody will ever know us as well as either our parents or our children do.  And I give the edge to the kids.  After all, our parents only got us when we were young and maturing.  Our kids got us when we were more or less finished products.  Our parents knew us as Subjects, our kids know us as Rulers.  And everyone knows that Rulers are much more prone to the despotism that comes from unchecked power than Subjects ever could be.

I did not live the Golden Book version of the father-child relationship as either a son or as a father, and I certainly did not get a 100% in my parenting grade.  I do seem, however,  to have at least passed the course because as the holidays get underway I look forward to seeing my children and they seem to look forward to seeing me.  Which is a pretty good thing to be thankful for.

And because it is a holiday weekend and you will need plenty to read as you rest after hitting the Thanksgiving leftovers, I will share that other piece of reading after all.

Did you ever yearn to take a road trip in your youth?  Back in the Great Depression there was a group of young women from central Illinois who did just that.  From 1934 to 1942 these young ladies hit the road each summer in a used, brush-painted 1926 Ford Model T that was considered hopelessly ancient even then.  My friend Ed Stembridge wrote a little about their story in a three part piece over at Curbside Classic.  It is a wonderful story that is about much more than an old car, and you should read it.  And if you have already read it, you should read it again (as I did).

Part One (here) tells the beginning of the story of The Gypsy Co-Eds and goes a little into what the Model T was (and what it was not) because most people younger than about eighty-five have no idea.

Part Two (here) takes us on some of their adventures – adventures that most of us would never even think of taking in a car with the Model T’s (lack of) capabilities, then or now.

And with that I wish you a happy and fulfilling remainder of your Thanksgiving weekend.

5 thoughts on “Thanksgiving Thankfulness – Fatherhood Edition (Plus Some Bonus Reading)”